Beirut, Lebanon – Hundreds of students in Lebanon have left schools and universities to join anti-government protests that are increasingly targeting state institutions as they enter a third week. 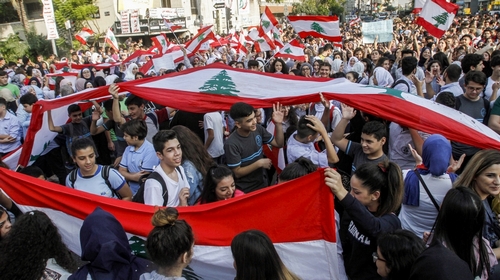 Raseel, a 16-year-old student in Sidon, told Al Jazeera on Wednesday that tenth, eleventh and twelfth grade students met outside her school at 7:30 am (05:30 GMT) and headed to the city’s main protest area, the Elia Crossing.

“We are on the streets to provide ourselves with a better future, because most of us are graduating without any job opportunities and are forced to leave the country,” she said via telephone.

Raseel added that students had decided to remain in the streets until they could be certain that “our money isn’t being stolen and we see laws to bring back the ecosystems they have ruined.”

“We can resume our education later, because what’s the point if there’s no future, no jobs and we have to sit at home,” she said.

Students across the country also joined protesters who have redirected their civil disobedience away from blocking main roads and towards organs of the state perceived as corrupt or inefficient, such as ministries, utilities, telecoms operators and the judiciary.

“We know that ministers and officials are taking big cuts from these institutions,” a protester who identified himself as Rabieh told local broadcaster MTV from outside a branch of the central bank in the northern city of Tripoli.

“We’re not closing them to Lebanese citizens who don’t have money. We’re closing them on the politicians,” he said.

Hundreds of thousands of Lebanese have taken to the streets since massive demonstrations broke out on October 17 after the government announced a plan to impose a fee on internet calls and said it was studying a hike in the value-added tax.

Protesters have demanded politicians be held accountable for decades of economic mismanagement and alleged corruption. They have called the formation of a government of independent experts to manage basic services such as water and electricity until new elections are held under a revised electoral law.

Prime Minister Saad Hariri announced his resignation 13 days later but was asked to stay on in a caretaker capacity by President Michel Aoun. More than a week later, Aoun has not yet set in motion the process of selecting a new prime minister in consultation with the parliament.

Aoun’s response, which aims to secure consensus among parliamentarians on the shape of the new government before a prime minister is designated, has fuelled a sense among protesters that politicians are continuing business as usual.

Students joined the street protests en masse, holding walkouts from Akkar and Tripoli in the north to the coastal cities of Jounieh and Jbeil, the mountain village of Sofar, as well as in the Bekaa and in south Lebanon, including in Nabatieh and Sidon.

One student marching through the streets of the Beirut district of Achrafieh said that the “revolution gave me new hope” to remain in a country where many travel abroad to seek better opportunities. “I had thought of leaving every single day,” he told local news channel Al Jadeed.

“Why should I go to class if there’s no future for me?” one student told Lebanese broadcaster MTV.

In addition to schools and universities, a range of public institutions were also targeted.

In Beirut, protesters blocked entrances to the Central Bank and state-run electricity company Electricite du Liban – an institution long seen by many Lebanese as a symbol of a dysfunctional state that has failed to secure 24-hour electricity coverage since the country’s 1975-90 civil war. Protesters held signs asking cars to honk in support, and many horns blared.

Others blocked the entrance of the education ministry in Beirut, where they chanted “all of them means all of them and Chehayeb is one of them,” in reference to caretaker Education Minister Akram Chehayeb.

They also blocked the entrances to state telecoms companies Alfa and MTC Touch, while private banks – many of which are connected to politicians – were also the target of civil disobedience. Images on local media said showed images from the Bekaa town of Jub Jannine, where school students, some still wearing their backpacks, formed a chain blocking a branch of the BBAC Bank as patriotic music played.

The student-led demonstrations present a new challenge for security forces who had stepped up efforts to clear blocked roads since the beginning of the week.

Several videos circulated online showing soldiers of the Lebanese Army kettling student protesters, including outside the Education Ministry in Beirut and in the West Bekaa town of Kamed El-Laouz, where brief scuffles broke out.

In Koura, north Lebanon, an army officer told students that he would see to it that anyone who closed the road was arrested. “17, 15 years old, I don’t care. The road will not be closed,” the officer said, as students continued to stand in the street.