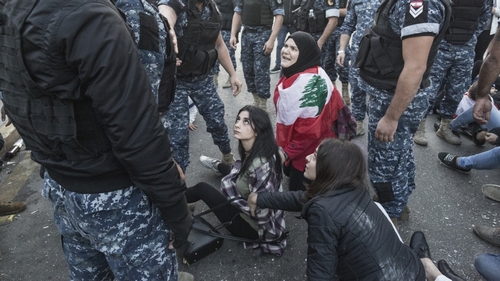 After a relatively quiet weekend following nationwide celebrations of Lebanon’s 76th independence day on Friday, the trouble began on Sunday night when protesters blocked roads across the country in advance of calls for a general strike on Monday.

That night saw some of the most sustained clashes since the protests began, as demonstrators and sectarian supporters of leading Shia parties Hezbollah and Amal riding scooters faced off repeatedly until the early hours on Beirut’s arterial ring road.

Scores of riot police attempted to keep the two sides apart as sectarian supporters threw rocks at protesters, who retaliated in kind.

Using alleyways on either side of the highway, Hezbollah and Amal Movement supporters tried several times to infiltrate the group of protesters, some of whom armed themselves with sticks and metal bars.

At one point protesters chased the infiltrators, bringing back and setting fire to one of their scooters as a trophy.

“It hasn’t deterred me at all, of course, I will be out again,” said protester Marie-Nour Hechaime, who fled the scene twice before returning to continue blocking the road. “It was scary on the spot, but not more than that.”

Demonstrator Wael Abdel Khaled pulled up his sleeves to show Al Jazeera the cuts and bruises he sustained.

“They hit both my arms and my leg with a rock,” Abdel Khaled said. “It was raining rocks on us. It was a battle, really like a battle. But we are not scared. We want it peacefully, but we are not scared of anyone. We want to build a better Lebanon.”

Another group on mopeds headed to Martyr’s Square, where they destroyed protesters’ tents and cars parked nearby.

Shortly after 3am (01:00 GMT), riot police deployed large clouds of tear gas to clear the crowds and by morning, the road was open again. The general strike planned for Monday did not go ahead.

On Monday night, a smaller number of protesters took to Martyr’s Square and Riad el Solh, many pacing the streets carrying metal bars after news spread that groups of Hezbollah and Amal supporters were once again riding their motorcycles through downtown Beirut.

The atmosphere was oppressively tense, a marked change from the celebratory, hopeful mood that has defined the protest movement until now.

Protesters maintained they carried the sticks purely for self-defence; many, however, appeared on a hair-trigger and spoiling for a fight.

As the gang of riders drove past, scores of protesters broke through the barriers riot police had erected to separate the two groups and ran at the riders, yelling and waving their improvised weapons.

Several riders stopped and hurled rocks back before driving off. The scene repeated itself several times throughout the night as the riders returned and security forces struggled to keep the two groups apart.

“This is self-defence at the end of the day, the people here are very peaceful but when you are getting hit a first, second, third, fourth, fifth time, you need to protect yourself in the end,” said Abdel Khaled.

“Anyone, by human nature, when he’s scared he is going to defend himself.”

Other protesters, however, were concerned by the violent development.

“When I saw them holding weapons I told everyone, ‘What you’re doing does not represent our protest,'” said artist Michel el-Hachem, adding the change in atmosphere on Monday made him uncomfortable.

“I was telling everyone, ‘Please leave the square’ and I and a lot of other people who didn’t agree with this type of protest actually left.”

By Tuesday the tensions spread to other sectarian groups: in the Ain el Remmaneh and Chiyah neighbourhoods of Beirut, Hezbollah and Amal Movement supporters clashed with locals, many of whom support the Christian Lebanese Forces party, throughout the evening.

As the two groups stood on either side of a street – which marked a major front line between Christian and Muslim sides of the city during the country’s 15-year civil war – onlookers remarked on the eerie echoes conjured by the scene.

While fewer protesters have continued to turn out since the clashes escalated, the smaller numbers on the streets this week was attributed to a need to recover and regroup, said Abdel Khaled, rather than any loss of determination.

“Because we had a battle on Sunday night, so, of course, some people, they want to rest – in Arabic, we call it the ‘warrior’s break’. They need to breathe a bit after what happened, maybe there is damage. But people are still talking, they’re having meetings and trying to find a solution.”

Hechaime noted things have changed after the past few days of violence.

“About the future, I feel that the honeymoon is over… People are starting to feel that this is going to last. We’re really going to have to be strategic and even the ‘we’ is starting to be re-evaluated a bit.

“I feel a bit discouraged at the moment, but I think it’s normal that you have ups and downs, so I think we just have to continue.”

Some, however, argue if the anti-government protesters aim for a truly united Lebanese movement, they ought to consider what they have to offer the young Lebanese coming out in support of Hezbollah and Amal.

“There is a kind of discourse that is very dichotomous: us and them, we are civilised, we want to bring about a new country, we know how to protest. While they are thugs, and mobs. It’s very pejorative, reducing their whole identity to them riding around on mopeds causing tension,” said Jamil Mouawad, a politics lecturer at the American University of Beirut.

“The superficial reading is that they’re counter-revolutionaries, sent by parties to beat up protesters and push forward a counter-revolution; but that’s not the main cause. They consider the road closures an act of aggression against their mobility as these are the main routes of access to their neighbourhoods. The more protesters are closing roads, the more they are irritated.”

Rather than reacting to aggression from sectarian supporters, protesters should attempt a dialogue, said Mouawad.

“I don’t see that protesters have opened any channels to reach out to these people, other than the chants saying ‘all of us’.”

As the protesters grow fearful and weary, a second, equally pressing concern is where they go from here.

President Michel Aoun announced on Tuesday that consultations to select a new prime minister will be held at the presidential palace in Baabda on Thursday, a full month after caretaker Prime Minister Saad Hariri resigned.

If Parliament’s next choice is anything like the last – Tripoli billionaire Mohammad Safadi was briefly nominated a two weeks ago before widespread protests in response convinced him to withdraw his name – demonstrators are unlikely to accept it.

If, however, the popular chant calling for the rejection of the entire existing political class, “all of them means all of them”, is fulfilled, who will lead the country next?

So far, a key tenet of the anti-government protests’ success has been their lack of a defined leadership. Having no one in charge has allowed protesters to dodge calls for negotiation from politicians and represent themselves as truly grassroots.

Some, however, in the ubiquitous WhatsApp groups where many of the protests are organised, have begun to voice concern that without leaders and a clear strategy for the future, confidence is waning as to the long-term gains of opposing a new government formed from existing politicians.

“Who will replace them, after all? We need, at the very least, a mission statement and some lists of candidates,” said one poster.

Before a new breed of politicians can be carved out, the priority must be solving the economic crisis looming over the country, said university professor and activist Mona Fawaz.

“This is the way forward but it’s not easy. You cannot reverse 40 years of corruption in 40 days. Unless there is an intervention by the current government to move us out of the deadlock we are in … the danger is grave.”

Civil society organiser Zeina al-Helou, however, said among some groups plans for the future are already under way.

“The protests did not start from scratch, a number of political groups actively working towards change had already started way before 17 October,” she said.

“The next step is obviously elections and this is on the agenda, of course. We are working at the grassroots level with the protesters and in different regions to ensure that the achievements of the protests yield themselves in election results. So yes, there is a plan; yes, there is a will and; no, we will not stop,” said al-Helou.