Meghan Markle will not be the first royal bride to be walked down the aisle by someone other than her father – a practice wedding experts say has become increasingly common in modern ceremonies.

Queen Victoria, whose father died from pneumonia when she was eight months old, was given away by her uncle Prince Augustus Frederick, the Duke of Sussex, in 1840. She went on to walk her fifth and youngest daughter, Princess Beatrice, down the aisle when Beatrice married Prince Henry in 1885.

In 1936 the American actor and divorcee Wallis Simpson was given away by her close friend Herman Rogers after a scandal engulfed her wedding to Edward VIII. The then prime minister, Stanley Baldwin, told Edward the country would consider the marriage morally unacceptable because the Church of England opposed remarrying after divorce.

In 1960 Princess Margaret was given away by her brother-in-law Prince Philip when she married Antony Armstrong-Jones at Westminster Abbey, after her father George VI’s death in 1952. 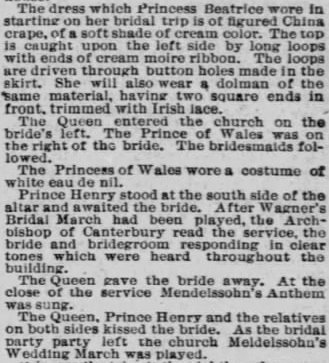 Jenna Hewitt, a wedding planner, said tradition was becoming less important in ceremonies. “I’m seeing different variations of people walk down the aisle. Ultimately it normally is the father, but I’ve had examples where the parents have separated so the mother and the father have both walked the bride down the aisle. I’ve had instances where the mother’s widowed, I also have a bride this year who will most likely be walked down the aisle by her son.

“We live in a global society now. You’ve got a mix of different traditions. Both sets don’t always have a purely British background, you might have mixed race or mixed religion. In that instance, British Christian tradition becomes less relevant.”

Those who decided to be accompanied by someone else were “very confident in that decision because it will be for a really personal reason,” Hewitt added.

Matthew Oliver, another wedding planner, said: “We are starting to see a change in weddings, with couples not always following the traditions, whether that is due to circumstances, such as with Meghan and her father, or couples just want to do their own thing.

“The main tradition we have seen a change with is the cutting of the cake – couples instead opting to do something more unique and personal to them. We had a couple wanting to be the first to open the shots bar before the first dance, by having a shot with their guests en masse.”

It has come as a surprise to royal watchers that Markle has chosen Prince Charles rather than her mother, Doria Ragland, to accompany her down the aisle after her father said he would miss the wedding due to ill health.

Ragland is thought to be the only close relative of Markle attending the wedding, and Markle has previously spoken about their close relationship, referring to her mother in one interview as a “best friend”.

Ragland will accompany Markle in the bridal car as originally planned and will stay with her at the Cliveden House hotel in Taplow on Friday night. But in those final moments it will be her soon-to-be father in law who will accompany her.

“It’s about having somebody by your side that you can share the experience with,” Hewitt said. “You’re going to feel quite nervous walking down the aisle, particularly in Windsor, and being filmed for the grand occasion. You want someone that you feel ultimately really close to, really relaxed with, that’s going to give you that hand squeeze that says ‘this is OK’.”

Charles has experience in assisting brides on their big day, having walked Alexandra Knatchbull, Princess Diana’s goddaughter, down the aisle in 2016.