The heatwave roasting Britain has given Glasgow its hottest day on record at 31.9C – leading to weather conditions known locally as “taps aff”.

The Met Office said the temperature on Thursday exceeded a previous peak of 31.1C, recorded in 1950.

The forecaster Sophie Yeomans said it was the warmest day of the year in Scotland, but it failed to beat the June record of 32.2C set in 1893 at Ochtertyre, in Perth and Kinross.

The heat in Glasgow has been enough to start “melting” the roof of the Glasgow Science Centre – or its weatherproof membrane, at least.

Although black goo was oozing from some panels on the centre’s roof, a spokeswoman said its structural integrity had not been affected. “When we return to typical Glasgow colder climes, we shall set about cleaning it,” she added. 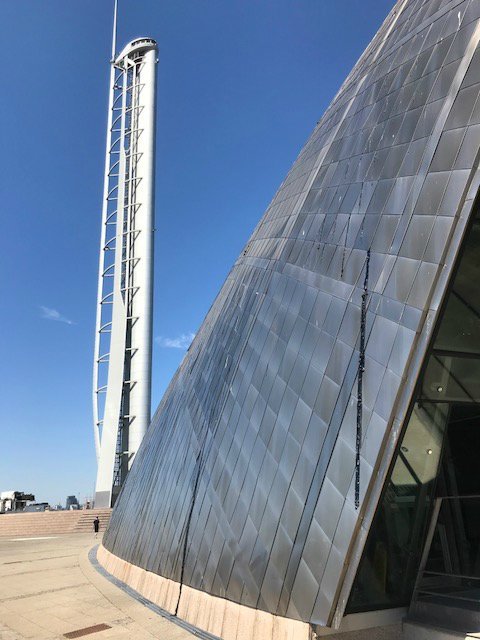 How hot? So hot the Glasgow Science Centre roof is melting a bit ??? https://t.co/TUzm3GJZ1K pic.twitter.com/I5uNLBcnWv

Glasgow was hotter on Thursday afternoon than London, where the temperature was 27C.

The heatwave in Britain has set a new record for the hottest day of the year every day since Monday, with Porthmadog in Wales reaching 32.6C on Thursday. It is the first time since 2013 that temperatures have reached 30C at the same time in England, Scotland, Wales and Northern Ireland, the Met Office said.

“Last year, for England, there was a warm spell where they had five days over 30C, but what makes this current spell different is that it’s nationwide,” the meteorologist Bonnie Diamond said.

Satellite images from the Met Office show almost no cloud cover over any part of the UK.

The latest view from space ?️ highlights all the sunshine ☀️ across the UK today, although there is more cloud across the Northern Isles pic.twitter.com/Y1P5GB0dTg

The sunny and warm conditions are expected to last until early next week, but Diamond said easterly winds would bring temperatures down slightly.

After being forecast earlier in the week, thunderstorms were looking “less likely”, Diamond said. “There is a small risk of seeing some showers developing in the far south-west, but otherwise it will be dry.”

Public Health England has issued a warning, saying the extreme heat may pose a risk to the most vulnerable. The Met Office’s heat-health watch alert remains at level 2, meaning social and healthcare services are on standby to reduce harm from the high temperatures.

The heat is hampering efforts to bring a wildfire on moorland in the Peak District under control. The army has been helping fire crews battle the blaze.

Fire chiefs said the situation could go on for weeks unless a significant downpour arrived, and a wind change could provide more fuel for the fire. A number of homes were evacuated as pockets of fire continued to burn, Greater Manchester fire and rescue service said.

Speed restrictions have been imposed on some rail lines in the UK, while water supplies have been affected in parts of the Home Counties, as well as Staffordshire and Shropshire.

People have also been warned to take care near water, with the RNLI urging those heading to the seaside to choose beaches with a lifeguard.

Jesse Trump vows to get aside ‘blood-stained’ Middle East