Bogota, Colombia – Protesters in Bogota have expressed scepticism over President Ivan Duque’s call for “national dialogue” to quell the demonstrations that have rocked Colombia since last week.

“They’re not going to negotiate with us,” said Hector Paez, a 60-year-old university professor who was among hundreds gathered in the city centre of Plaza Bolivar on Sunday evening.

Duque made the announcement late on Sunday after meeting newly elected mayors and governors. He said the talks would include a wide demographic of citizens and would focus on six key topics: the struggles of most affected zones of the country’s armed conflict, corruption, economic inequality, education, the strengthening of government institutions and the environment.

“I want us to have a broad, participative and deliberate national conversation with all social sectors,” Duque said in a televised address.

But many of the protesters chanting “down with Duque” say the talks are too little too late, pointing to failed promises made during previous talks with students and indigenous protesters.

“The leaders of this country want to distract the people, to deceive the people,” said Paez. “To continue doing what they’ve always done.” 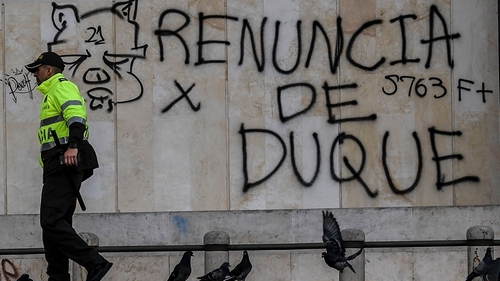 A policeman walks by a graffiti against Colombian President Ivan Duque, in Bogota Juan Barreto/AFP

Colombia’s so-dubbed “Paro Nacional”, or “National Strike”, was announced in early October by labour unions protesting rumoured labour reforms. But the already unpopular Duque government was marred by a series of scandals, including the killing of indigenous people by criminal groups in Cauca and the resignation of the defence minister after a bombing aimed at dissidents of the demobilised Revolutionary Armed Forces of Colombia (FARC) rebel group killed at least eight children. That, along with a wave of anti-government protests sweeping across Latin America, turned the one-day peaceful march into a broader protest against right-wing Duque.

“This is definitely a wake-up call that a new approach is needed that actually meets the demands of people, and is more accountable, less corrupt and doesn’t completely ignore the concerns that people are putting out there,” said Gimena Sanchez, the Andes director of the Washington Office on Latin America (WOLA). 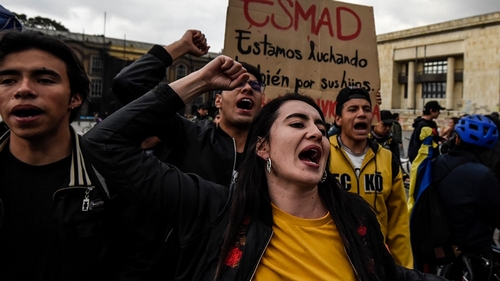 More than 250,000 people from a variety of different groups – indigenous, students, union, among others – marched on last Thursday, touting a number of demands including the implementation of the 2016 peace accords and addressing endemic economic inequality. Masses countrywide moved through Colombia’s biggest cities carrying rainbow indigenous banners, the red, yellow and blue of Colombia’s flag and anti-Duque signs.

Although the protests have largely been peaceful, nights have sometimes ended with violence, looting, and tear-gassing of peaceful crowds. At least three police and three protesters have died amid the unrest. Hundreds more have been injured, including 18-year-old Dylan Cruz, who remains in hospital after a tear gas canister launched by riot police hit him in the face.

The young student has since become a symbol for many to continue protesting despite Duque’s attempt to calm the marches with his Sunday announcement. Newfound momentum from the violence may be a key factor in determining if marches will continue or fizzle out.

“He’s an inspiration for the marches to continue so that the blood of Dylan didn’t fall in vain,” said 30-year-old protester Zulena Alaphe, “like the blood of many other that has been shed during this protest.”

Alaphe held a candle at the site where Cruz was hit, which had since been covered in candles, flowers and signs reading, “Strength Dylan”.

“I want other generations to take the stand and put forth new ideas so this country can have a new future, because, honestly, we’re tired,” she said. “We’re tired of the same.” 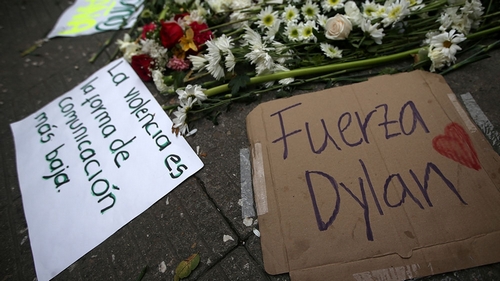 Signs lie in the street where Dilan Cruz was injured, allegedly by a tear gas canister fired by riot police during the national strike on the previous day Luisa Gonzalez/Reuters

‘A path that won’t end well’

While Duque said he hoped to “unite Colombia”, few details were provided on how it would happen.

“The president is going down a path that’s going to be really difficult to end well,” said Ariel Avila, deputy director of the Peace and Reconciliation Foundation. “The president has gone into these dialogues, but they don’t have clarity on how to do it or who to talk to.”

And as Duque enters talks, he will be wedged in between the demands of protesters and those of his own right-wing political backing. He will have to make a decision that will shift the trajectory of the country to one extreme or another, Avila said.

Meanwhile, protesters have called for more marches on Monday afternoon.

“When I was young, I participated in all of these protests. And my friends, my companions who fought with me, the (government forces and armed groups) killed them,” Paez said, adding that he will continue to be out in the streets. “These new young people, I hope they can achieve what we weren’t able to do, and keep their lives while doing it.”