Conservative MPs have been given training to brush up their Instagram skills, with advice suggesting they use the social network to show the electorate that they are “real people”.

The Instagram training session was offered in January, part of an initiative by the party chairman, Brandon Lewis, to combat what is perceived to be Labour’s advantage over the Tories on social media output and following.

Tory MPs were told that they could reach a younger voting audience through Instagram than via other social media and marketing platforms. They claim that 35% of the people who follow @conservatives on Instagram are aged between 18 and 24.

Instagram was described to MPs as “a chance to show you are a real person who people can relate to or be inspired by – the goal is to do both.”

The trainers said photographs of objects could help Conservative MPs tell stories about who they were supporting or what they were working on.

Examples given included the universities minister, Sam Gyimah, posting a picture of his ministerial red box in December and joking that it was not what he wanted from Santa, and Johnny Mercer showing support for Special Boat Service recruitment by posting a picture of a mug with a slogan.

MPs were warned against using too many generic graphics or posting images that did not feature human faces.

During last year’s conference season, the party was widely ridiculed on social media for a series of images posted to Instagram that showed ministers and other senior Conservatives in awkward behind-the-scenes poses.

The defence secretary, Gavin Williamson, has attracted mockery for his Alan Partridge-esque Instagram posts. He once posted a picture of a Land Rover with the caption: “In many ways when I look at my #landrover I think it epitomises everything that is so fantastic about #greatbritain.”

The Instagram training documents, seen by the BBC, encouraged MPs to use historical events and anniversaries as themes for celebrating the Conservatives. It was suggested they use events such as the release of the film Darkest Hour to make links to Sir Winston Churchill, for example. The official Conservatives account has taken to participating in #tbt – “Throwback Thursday” – by posting archive content about Tories from the past.

This week’s #tbt is brought to you by Harold ‘Supermac’ Macmillan, who became the king of house-building in the early ’50s as Churchill’s Housing Minister, building as many as 300,000 new homes a year in true Conservative style. His spell as PM from ’57 to ’63 saw increased prosperity and rising living standards, leading him to suggest the British people had “never had it so good”. A wave of domestic legislation included the 1957 Housing Act 1957, the 1960 Offices Act, the 1960 Noise Abatement Act, the 1961 Factories Act, the introduction of a graduated pension scheme, a Child’s Special Allowance for orphans of divorced parents, and a reduction in the working week. Abroad, he moved with the times and continued decolonisation after his landmark 1960 ‘Wind of Change’ speech in South Africa. Supermac, the pragmatist’s pragmatist, was once asked what is most likely to blow governments off course. “Events, dear boy, events,” he replied. #BritishHistory #Cartoon #Art #Home #Building #1950s #1960s

Another example of good practice shown during the training was the use of letters from constituents to tell stories about Conservative policy. A post featuring a letter to Matt Hancock MP about ticket touting was highlighted. It is not clear from the presentation slide alone if trainers addressed whether MPs should get permission before uploading private correspondence to the social network even when anonymised.

In other parts of the presentation, MPs were encouraged to respond to the comments underneath their Instagram posts, and Sajid Javid was praised for the complex composition of one of his Instagram stories – short collections of video, text and images that are available for people to view on Instagram for 24 hours.

Tories were encouraged to do their posting later in the day, when people are checking the service during leisure time in the evenings, which they were told was an ideal time to engage them.

It has not been all bad for the Conservatives on social media. Theresa May’s social media team were praised when, after a cough ruined her set-piece speech at the Tory conference, they sent a tweet featuring a packet of cough sweets. 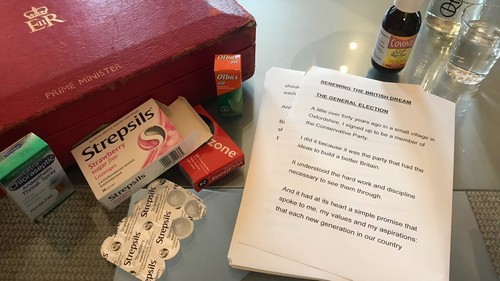