Sajid Javid has said there are no plans to impose fresh sanctions on Russia following the latest nerve agent poisoning in Wiltshire.

During a visit to Salisbury and Amesbury, the UK home secretary said: “We don’t want to jump to conclusions. Clearly, what we have already determined, what our expert scientists have determined, is that the nerve agent in this incident is the exact same nerve agent as was used back in March when the former Russian spy Sergei Skripal and his daughter, Yulia, were poisoned. 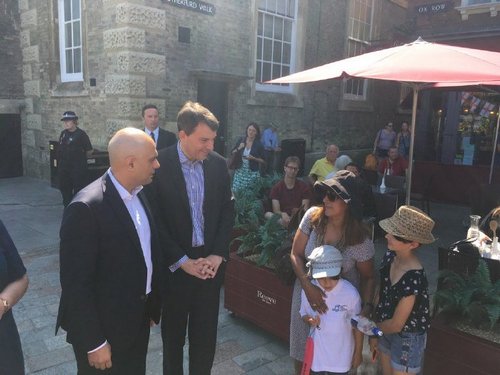 “We know back in March that was the Russians. We know it was a barbaric, inhuman act by the Russian state. Again, for this particular incident, we need to learn more and let the police do their work.”

Javid met residents caught up in the latest nerve agent poisoning and spoke to experts dealing with the aftermath.

During a walkabout in Salisbury, he reassured residents that detectives were working hard to understand how two people came to be struck down by novichok four months after the Skripals were poisoned.

Javid visited a baker, spoke to shoppers and briefly listened to a young people’s music event taking place in the main city square. 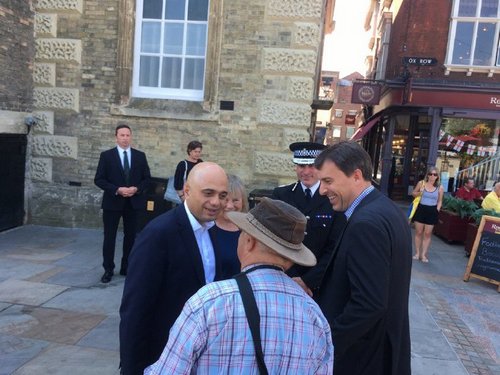 There is frustration among Wiltshire residents that the authorities have not been clearer about both incidents. Asked if secrecy had been prioritised over public safety, Javid said: “No, I think the advice both from the first incident and now was absolutely correct.

“There is no evidence at this point that the two individuals hurt by this incident visited any of the areas that the Skripals visited. That said, I think everyone would want to listen to the advice of the professionals and make sure we take some precautions.”

Meanwhile, a police officer who attended hospital over concerns he may have been exposed to novichok has been given the all-clear. The officer, believed to be with Wiltshire police, initially attended Great Western hospital in Swindon after feeling unwell.

He was later taken to Salisbury district hospital, which now regards itself as the world’s leading centre for the treatment of nerve agent poisonings, and given the all-clear.

Investigators have started examining key sites visited by Dawn Sturgess and Charlie Rowley in the hours before they fell ill on 30 June.

Officers in protective hazmat clothing began searching a homeless hostel in Salisbury, where Sturgess lived, and Rowley’s property in Amesbury, where they both collapsed.

The Guardian learned on Friday that an item contaminated with novichok, which leftSturgess and Rowley fighting for their lives, has not been recovered.

Sources with knowledge of the investigation, being led by Scotland Yard’s counter-terrorism unit, confirmed swabbing skin from Sturgess and Rowley had proved crucial in determining they had been poisoned by novichok after handling it.

Scientists examined swabs taken from them as they lay critically ill in Salisbury district hospital. The greatest concentration of novichok was found on their hands. That led scientists at Porton Down to tell investigators the couple had handled whatever the contaminated item was.

Sturgess and Rowley were not targeted for assassination, police believe, and their contamination is thought to be a result of the recklessness of whoever possessed the novichok.

On Sunday, Salisbury was busy with visitors and shoppers. At St Thomas’s church in the city centre, rose petals gathered from residents’ gardens were scattered across the city from the tower to celebrate their patron saint’s day. Parishioners said the gesture was all the more poignant in these difficult times.

Despite the insistence by Public Health England that, based on the small number of casualties, the risk to the public is low, some people were staying away.

Emma, who works in Salisbury and has a three-year-old son, said: “Where are we at now? The information out there is just so random. Nobody knows how the couple are. We don’t really know how well the Russian spy has recovered. We haven’t seen him at all.

“It’s the people with families. I won’t bring my son in. My friends with children don’t want to, either. We used to always go to the Queen Elizabeth Gardens one of the areas cordoned off, that’s where everyone with young children goes.

“I thought that Salisbury was back to normal. Now it’s not OK, another two people have been affected.”

John Glen, the Salisbury Conservative MP and a treasury minister, said he believed the pair taken ill had come upon “debris” from the Skripal attack. He also said he would be surprised if detectives did not know by now the individual or individuals who targeted the Skripals.

Kelvin Inglis, the rector of St Thomas’s, said: “We’re very worried about the casualties, it’s not looking good for them. I haven’t picked up any sense that people are worried that this dreadful chemical is at loose in Salisbury. I think people are just carrying on and everything is quite safe.”

Inglis said he believed the city was in a better place to cope with the new incident because of how it pulled together after the March attack.

“What came out of last time around is positives for the city. I think we’re building on surer foundations now. I think we learned a lot about our resilience. As we face this new challenge the city is a more coherent place now and I think the response is coordinated and I think we’re pulling together. Probably much more than we were in March when it took us completely by surprise. I think we’re in a better place as the thing starts, but it is a blow.”

Windrush generation fear hotline will be used for data gathering