Firearms, it would seem, have become a feminist issue. Second amendment proponents and the gun industry are using female empowerment, and even the #MeToo movement, to sell their products and fight back against gun control. Meanwhile, the last few months have seen a spate of viral social posts by women brandishing guns, apparently in the name of feminism.

On Tuesday, a 22-year-old Kent State University graduate, Kaitlin Marie, garnered headlines after posting graduation photos in which she was holding a semi-automatic rifle. Marie wrote: “As a woman, I refuse to be a victim & the second amendment ensures that I don’t have to be.”

Last month, Brenna Spencer went viral after tweeting a graduation photo of herself in a “Women for Trump” shirt with a firearm tucked into her jeans. Spencer’s tweet prompted a number of other women to share their arms-bearing photos, often with captions about guns being empowering for women. Some conservative men also weighed in approvingly. “This is what REAL feminism looks like. Strong, smart, confident, and armed,” Charlie Kirk, a rightwing media personality, tweeted in response to Spencer’s post.

I have no apologies for my graduation photos. As a woman, I refuse to be a victim & the second amendment ensures that I don’t have to be. pic.twitter.com/5CKmQobrMb 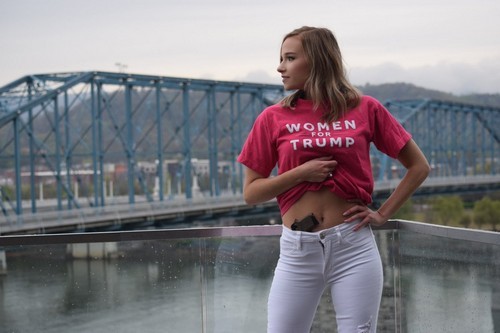 Then you have the conservative pundit Tomi Lahren, who recently posted an Instagram photo of herself wearing yoga pants with a gun tucked in the front. “Ladies, chances are your assailant is gonna be bigger, stronger and faster and that’s why you have @alexoathletica for your gun,” wrote Lahren. The post was a promotion for Alexo Athletica, which sells gun-friendly women’s sportswear. Alexo’s website explains: “While big name athletic companies shy away from promoting one’s second amendment right and certainly have never built in the ability to do so, Alexo will never back down from supporting a woman’s right to choose how she defends herself.”

Much of this messaging seems to echo the NRA line that guns empower women. After the Pulse massacre in Orlando in 2016, the NRA spokeswoman Dana Loesch claimed that calls to ban the AR-15 constituted a “war on women”. Loesch argued that because the AR-15 is the most popular rifle with women, “you’re talking about disarming women”. In the aftermath of this year’s school shooting in Parkland, Florida, Loesch also defended guns by arguing that arming women would help them defend themselves against sexual assault.

Framing gun rights as a feminist issue feels disingenuous and exploitative when there is a huge amount of research that shows women are more likely to be killed by a gun than saved by one. As Jessica Valenti wrote for the Guardian: “The NRA wants us to believe that guns protect the most vulnerable among us, instead of realizing the truth – that they kill the most vulnerable.”

Nevertheless, it would be wrong to ignore the fact that an increasing number of women do find guns empowering; women are the fastest-growing gun ownership demographic. According to a study from Harvard and Northeastern universities, gun ownership among American men dropped from 42% in 1994 to 32% in 2015, while female ownership increased from 9% to 12%.

The gender pay gap may not be shrinking, but the gun gap seems to be

Deb Ferns, who runs Babes with Bullets, an all-women traveling firearms academy, attributes the rise in women buying guns in part to the growing number of single professional women who want a gun for self-protection. “When we first started the academy in 2004, most participants were women who wanted to do sports shooting,” she recounts, “normally because their husbands were interested in it.” Around 2011, she says, there was a definite shift. Younger women started coming to the academy because they lived alone and wanted a gun to protect themselves.

Many female gun owners who own a gun for protection also have deeply personal experiences that led them to the purchase. Dion, a 35-year-old professional in California, for example, told the Guardian she first bought a handgun when she was 27 after someone tried to mug her. “That’s when I decided I do need to empower myself,” she explained. “Owning a gun has made me feel more comfortable. I really do think it’s an equalizer.”

Shayna Lopez-Rivas, 23, who recently graduated from Florida State University, also bought a gun after being attacked. Lopez-Rivas grew up in an anti-gun household and always had a negative view of guns until she was raped on campus in 2014. “I had pepper spray, he had a knife,” she said. “I wasn’t fast enough or strong enough.” The first time she picked up a gun, Lopez-Rivas felt empowered. “As much as women are equal to men in every other way, the truth is that in a biological sense we’re not equal. They’re bigger, faster, stronger. We need to find something that is an equalizer. And for me that equalizer was a firearm.”

It’s important to listen to women like Lopez-Rivas, who have found guns to be empowering. It’s crucial we don’t dismiss their experience. Nevertheless, it’s also crucial that we don’t let gun rights activists cynically exploit women’s rights to sell more guns. While firearms may empower some women, they kill a whole lot more.