If you wear glasses I’ve got some good news: you may well be smarter than the average person. A new study published in the journal Nature Communications has found that needing to wear glasses is associated with higher levels of intelligence. But you probably knew that already.

In the study, the largest of its kind ever conducted, researchers from the University of Edinburgh analyzed cognitive and genetic data from over 300,000 people aged between 16 and 102 that had been gathered by the UK Biobank and the Charge and Cogent consortia. Their analysis found “significant genetic overlap between general cognitive function, reaction time, and many health variables including eyesight, hypertension, and longevity”. Specifically, people who were more intelligent were almost 30% more likely to have genes which might indicate they’d need to wear glasses.

While being more intelligent may be linked to poor eyesight, it’s also connected with a lot of positive health benefits. Researchers found negative correlations between cognitive function and a number of health problems, including angina, lung cancer and depression.

Of course, it’s important to remember that these are all simply correlations not conclusive links. And it’s worth noting that what constitutes intelligence is subjective and can be difficult, if not impossible, to measure. Further, linking intelligence to DNA can quickly lead into bogus “race science”.

Forget genetics though – there’s plenty of empirical evidence that wearing glasses, whether you need them or not, makes people think you are more intelligent. A number of studies have found people who wear glasses are perceived as smarter, more dependable, industrious and honest. Which is why a lot of defense lawyers get their clients to wear glasses at trial. As lawyer Harvey Slovis explained to New York magazine: “Glasses soften their appearance so that they don’t look capable of committing a crime. I’ve tried cases where there’s been a tremendous amount of evidence, but my client wore glasses and got acquitted. The glasses create a kind of unspoken nerd defense.” 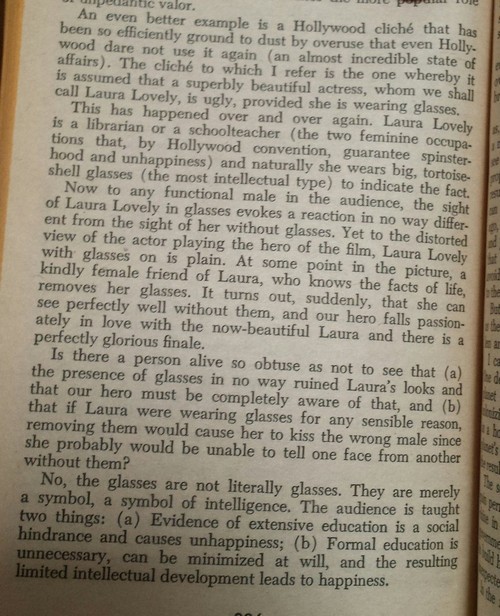 Isaac Asimov’s critique of the “ugly girl with glasses becoming popular” from 1956 is spectacular. pic.twitter.com/toxMCVRLgA

It’s not just defense lawyers who use glasses as a stage prop. Glasses are regularly used as shorthand in pop culture to connote that their wearer is intelligent. In the case of women, there’s also a well-worn “ugly girl who removes her glasses and is revealed to be beautiful” trope. Isaac Asimov has a wonderful critique of this in his essay The Cult of Ignorance. In the essay, which went viral when it was tweeted by an appreciative reader last year, Asimov writes: “The glasses are not literally glasses. They are merely a symbol, a symbol of intelligence. The audience is taught two things; (a) Evidence of extensive intelligence is a social hindrance and causes unhappiness; (b) Formal education is unnecessary, can be minimised at will and the resulting limited intellectual development leads to happiness.”

While America hasn’t changed much when it comes to its suspicion of intellectuals, the symbolism of glasses has begun to shift. Prescription-less glasses have become something of a fashion accessory, worn by people who want to look sophisticated or cool. Not everyone is impressed though – GQ called wearing fake glasses “bottom-of-the-barrel hipster behavior”. However, that hasn’t stopped a lot of celebs from enthusiastically scraping the bottom of that barrel. Justin Bieber is just one high-profile fan of fashion glasses. I’m quite the belieber in his sophisticated-glasses look, even if some may say he’s making a spectacle of himself.

Brazil’s News media in the Age of Bolsonaro