Toronto, Canada – If Canada’s election last month sent any message to the rest of the world, it was that climate change is now a major component of political discourse, especially in the North American country.

Prime Minister Justin Trudeau won a second term, albeit with a minority government, running on the message of balancing climate and the economy.

In his first term, Trudeau implemented a federal carbon pollution price, starting at about $15 ($20 Canadian) per tonne and rising to about $37 ($50 Canadian) per tonne in 2022, with a rebate for individuals. After the election, Trudeau recommitted to working on climate change, but said he still plans to expand a controversial oil pipeline opposed by environmentalists.

Trudeau is set to unveil his new cabinet on Wednesday, with Parliament opening its next session December 5. Environmentalists will be looking to Trudeau’s throne speech next month for signs about how he will approach climate change in the coming year.

Canada’s October election was the closest the country has ever come to a referendum on climate change. For the first time, all major parties put forward climate plans for the world’s 10th-largest emitter. Canada also sits on the world’s third-largest oil reserves.

Polls show Canadians have become increasingly concerned about climate change. A government report published in April found that Canada is warming at double the global rate, with northern Canada experiencing the brunt of that heat. Around the world, increasingly dire reports by the Intergovernmental Panel on Climate Change (IPCC) and more frequent and intense natural disasters have prompted weekly school strikes by children and teenagers, including in Canada. 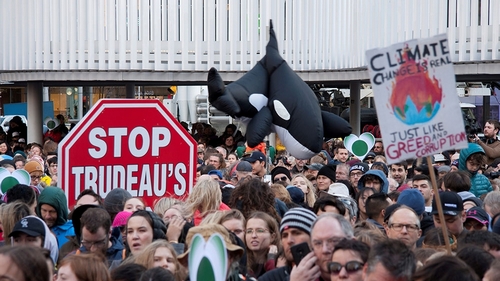 An inflatable orca is pictured next to a stop sign protesting the Canadian federal government’s purchase of an oil pipeline project, during a climate strike rally in Vancouver File: Peter Pawlowski/Reuters

During the election, Trudeau marched at the Montreal climate strike, drawing side-eye from activists who believed he was not aggressive enough on climate, highlighting the government’s purchase of the Trans Mountain pipeline in an effort to guarantee its expansion.

But ultimately voters saw him as the better alternative to Conservative leader Andrew Scheer, who promised to repeal the carbon price and ran on a climate plan that maintained the status quo.

David Coletto, one of the founding partners and CEO of Abacus Data, polled Canadians before the election on issues including climate change, and found that 42 percent would describe it as an emergency, and another 30 percent say they are not quite ready to call it that, but they think it will be in the near future.

“So that’s the starting point is there’s a broad recognition that it’s happening and we need to do something about it,” Coletto told Al Jazeera.

Voters polled by Abacus also ranked climate change as the number one issue driving them to the polls last month.

The data showed climate was a key ballot question, Coletto said. “If you don’t have a serious climate plan, if you aren’t perceived to take this issue seriously, people won’t vote for you.”

Coletto also pointed to the climate strikes as a factor in the election. “That’s a message or lesson for Canada that we can send around the world – young people, if you get involved you can have an impact,” he added.

Andrew Leach, associate professor at the University of Alberta focusing on environment and energy, said the results certainly showed that the Liberals ran on a comprehensive climate plan and despite multiple scandals won more seats.

“You can have carbon pricing and it’s not political suicide, and it can still be put forward by a party that is at least in the centre in terms of resource development as well,” he said.

Having a weak climate plan was a miscalculation by the Conservatives, Abreu said. They could have increased their seat count in Ontario and Quebec if they had a stronger plan.

“Had the Conservatives taken this issue more seriously, they perhaps would have been putting up a better fight in those ridings,” Abreu added.

By running on repealing the price on carbon, which Scheer called a “tax”, she said they were riling up a base that was going to vote for them anyway.

Leach added this election showed the conversation has moved from a question of “do we act?” to “how do we act?”

Greece holidays to expel Libyan apostolic delegate over Turkey-Libya accord

Now that Trudeau has been re-elected, it is unlikely the carbon price will be repealed.

While Abreu hopes that left-leaning parties like the New Democratic Party (NDP), which opposes the pipeline expansion project, will push the Liberal minority government to be more aggressive on climate change, Trudeau has already said the Trans Mountain expansion is one of his top priorities.

Trudeau’s plans to use the proceeds from the project to invest in a three-billion-dollar proposal to lower Canada’s emissions. Measures include planting two billion trees over the next 10 years. He said the initiative would create about 3,000 new jobs in tree planting.

But others, including environmentalists and some indigenous groups, worry what the expansion may mean for the land and communities along its path. 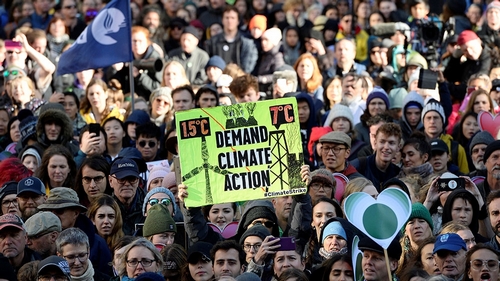 A crowd of thousands march in a climate strike in Vancouver File: Jennifer Gauthier/Reuters

Because Trudeau has a minority government, he will need other parties to support his speech from the throne to reopen Parliament. The speech will lay out his priorities going forward. Environmentalists hope it will include climate change.

Abreu said the Climate Action Network is pushing the government to include concrete climate actions in the mandate letters for Trudeau’s cabinet ministers. She is asking the government to act quickly to entrench Canada’s climate targets – 30 percent emissions reductions below 2005 levels by 2030 – in law, build infrastructure for electric vehicles and start planting trees. Abreu said it is especially important to start the conversation about a just transition to a sustainable future for Western provinces.

Western provinces do care about climate, Abreu said, but they’re feeling more anxiety over their jobs that are tied to the oil and gas sector. “That’s much more a conversation about the failure of previous governments to have the courage to undertake some really serious conversations about economic diversification and job creation in those provinces,” she said.

“The election results mean they’ll have other parties pushing them to go further than they would on their own,” she said of the Liberals. She expects the NDP, for example, to push the Liberals towards more ambitious climate action.

However, the Liberals will likely work with the Conservatives to move forward on energy infrastructure, including the Trans Mountain pipeline expansion from Alberta’s oil sands to Canada’s west coast.

Abreu is heartened by last month’s election results, and said any party hoping to form government in the future will have to show they are serious about combatting climate change.

If Trudeau can get his throne speech passed in Parliament next month, he will have the momentum he needs to move forward on his climate action plans, but he will also face pressure to reach out to western provinces who are feeling alienated and want to see the pipeline built.