How did Leave.EU break the rules?

Leave.EU, backed by the outspoken Ukip donor Arron Banks, was one of several pro-Brexit campaign groups founded to fight the 2016 referendum on EU membership. However, it failed in its attempt to be named the official campaign for Brexit by the Electoral Commission.

Following a lengthy investigation the Electoral Commission has concluded Leave.EU broke this reduced spending limit by at least £70,000 and possibly substantially more. This was largely as a result of paying substantial sums to a US political consultant, Gerry Gunster, who later introduced Banks to Donald Trump at an impromptu meeting at Trump Tower in late 2016. 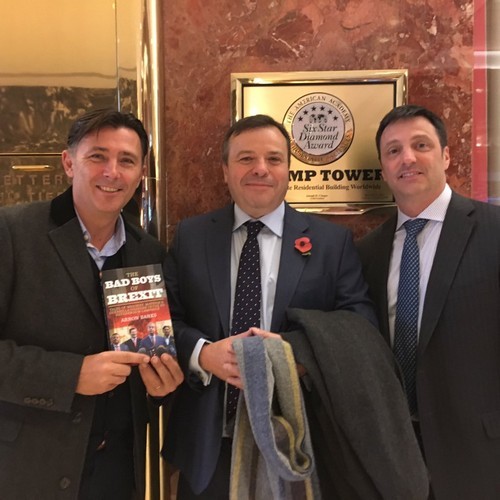 At Trump towers with Gerry Gunster our US strategist ! pic.twitter.com/phpJaLD1Nx

The Electoral Commission also concluded that Banks incorrectly declared £6m worth of loans he made to the campaign group, that appropriate receipts had not been kept, and that the campaign’s chief executive, Liz Bilney, may have “knowingly or recklessly” signed an inaccurate spending return.

How is Leave.EU being punished?

Leave.EU’s punishment for spending too much money in the EU referendum is to have to spend a bit more now. The Electoral Commission has fined the campaign organisation a total of £70,000 for failures in its declaration, with the regulator noting the level of penalties “has been constrained by the cap on the commission’s fines”.

The punishment could prompt calls for a review of election funding law, given it is relatively small for a campaign that also spent millions of pounds in the unregulated pre-referendum period.

There may be a worse outcome for Bilney, a business associate of Banks who served as Leave.EU’s official campaign chief. She has been reported to the Metropolitan police for a potential criminal investigation into whether she made a false declaration on the spending return.

Did the Electoral Commission find any links between Leave.EU and the activities of Cambridge Analytica?

Banks has always maintained that, while they initially attempted to hire Cambridge Analytica, this plan was dropped when Leave.EU failed to be designated as the lead Brexit group, meaning the data targeting business never actually worked on the referendum campaign.

The Electoral Commission’s report largely bears this out, concluding that Leave.EU was largely bluffing about its use of Cambridge Analytica, in an attempt to make its campaign look more sophisticated. The report also suggests that the Cambridge Analytica boss, Alexander Nix, overstated his company’s association with Leave.EU in public, in the hope of winning business from the campaign group.

The investigation states that despite public statements by the organisations involved there is no evidence that Cambridge Analytica had input into the Leave.EU campaign during the regulated period and “the relationship did not develop beyond initial scoping work”.

Instead, the data targeting company privately asked Leave.EU to stop using its name in public, fearing the association could cause it reputational damage.

However, the commission pledged to keep this aspect of the investigation under review in case further evidence about Cambridge Analytica comes to light.

Will this stop Brexit?

Almost certainly not, given it is the key policy of Theresa May’s government, although it could prompt a reform of campaign finance laws.

MPs are increasingly aware that is is difficult to find appropriate punishment for breaking electoral spending laws once an election result has been declared and accepted by the public. Pro-Brexit MPs have also accused remain campaign groups of colluding to evade spending limits, although the Electoral Commission declined to investigate.

Meanwhile, the official Vote Leave campaign group is facing a separate ongoing investigation into whether it broke its own £7m spending limit by channelling substantial sums of money to a fashion student during the final days of the campaign.