Santiago, Chile – A young man sits on a camp bed staring disoriented at the ground. Nurses attend to a pellet wound in his calf from where a single line of blood runs down.

A group of young people, their heads shielded by white and blue helmets, rush past carrying another young man on a stretcher. A helicopter flies above in air that is choked with tear gas, as firearms rattle in the distance.

Not far is Santiago’s Plaza Italia, the beating heart of Chile’s demonstrations, and now the centre of an increasingly violent conflict between police and protesters.

The wounded are being tended to in a makeshift medical site surrounded by artisanal stalls, all shut except for one selling keyrings and patterned bags – in the distant hope that a tourist might pass by and they could make a sale.

But tourists are unlikely as violent protests in the capital over growing inequality and the government crackdown on demonstrators continue. 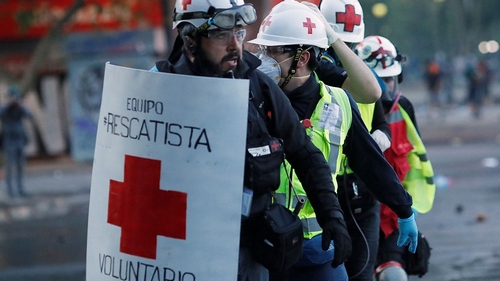 The protests erupted a month ago, initially as a student action against a metro fare hike. They have since mushroomed into widespread demonstrations across the country over the country’s economic model, as well as the government crackdown against the protesters.

At least 23 people have died, including five killed by police and military forces during the now-lifted state of emergency last month. Thousands more have been wounded – more than 220 of whom have been blinded or partially blinded by pellets or other projectiles.

On the front line, protesters are in a deadlock with police who confront them with tear gas and water cannon, and shoot firearms, while protesters fight back by throwing stones or setting up barricades.

And in their middle is a group of volunteers, all medically trained – some professionals, other students – who call themselves “the Brigada”. Similar self-organised groups are working across the country. 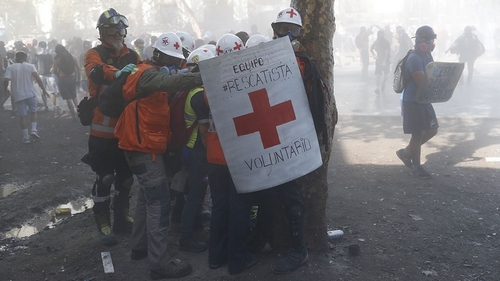 The volunteer medics are the movement’s unsung heroes.

While they often operate in the shadows, many support the protesters and their demands.

“If I wasn’t here, I would be out in the protests. Historically, I was always out with the social movements, seeing repression, but I haven’t seen as much repression as now,” says Rodrigo Nunez, 33, a trauma specialist who coordinates the brigade.

The medics go out as if they are in battle; helmets with visors, gas masks, padding to cover legs and arms, and makeshift shields made from disused metal sheets.

They try to get those wounded back to the makeshift triage site.

At the site, the brigade tries to protect themselves and the wounded as much as possible. The area is fenced off and secured with locks. Large plastic sheets act as barriers from pellets, but it does not do much to fend off toxic tear gas or water cannon.

“I was removing a pellet from the face about a week ago, then three tear gas bombs arrived by my face. The other team had to take the bombs and throw them away, but I couldn’t see, I couldn’t do anything. We can’t work when we’ve been gassed. And the person on the floor, he had pain from the gas, as well,” Nunez, the trauma specialist, says.

Volunteers quickly attend to the dozens – sometimes up to 70 a day – of wounded protesters who arrive, remaking the treatment “beds” – some of which are essentially yoga mats with sterilised paper towels on top. The brigade is living completely off donations. Many volunteers have given up paid work to help.

Victoria Valenzuela, 33-year-old nurse, puts a helmet on as she prepares to head to the front line with a team.

“We are risking our lives, well, risking an eye definitely. But I believe in our fight, I believe in the movement – my grandparents live with the pension of hunger,” she says.

Valenzuela was one of the team members that assisted 21-year-old student Gustavo Gatica, who was blinded after being shot in both eyes police pellets on November 8.

“That day was especially violent. Our team arrived running through the pellets, it was like being in war. So many people were getting shot in the crossfire that there weren’t enough of us to help them,” Valenzuela says. 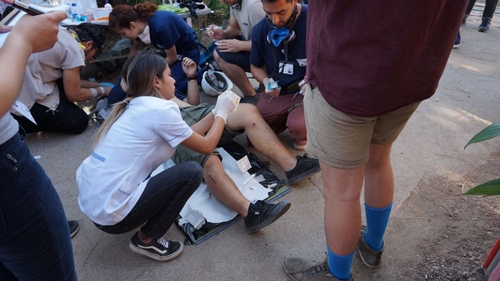 Three separate teams from the brigade had been sent out that afternoon to treat three separate cases with eye injuries.

“Gatica was just taking pictures, and they shot at his face. It’s horrifying. It touches some place in your humanity,” she recalls.

On her phone, she shows a picture of her shoes from that day. They were covered in blood.

Experts say the level of eye injuries as a result of pellet gunshots in just a couple of weeks is unprecedented. Dr Enrique Morales, of Chile’s state medical college, described the situation as an “epidemic”, and a “human rights catastrophe”.

Police director Mario Rozas suspended the use of the projectiles, except in extreme situations, pending a study, but protesters have documented their continued use.

Rafael Guerra, who is coordinating the health services in Universidad de Chile’s student federation, says that the front line of the protests is “like war”.

“What we’ve seen is injuries from pellets, multiple pellets in the whole body, that have gone into muscles, ocular trauma, pepper spray, muscular lesions, fractures,” he says. “They (security forces) have chocked them, hit them (protesters). We’ve attended close to 1,000 people, and it’s not only young people, because the social discontent is general, it’s young and old.”

At the triage centre, Marcelo Herrera, 31, uncovers a white eye patch, showing his pale, discoloured pupil surrounded by bloodshot red. He says he was lucky; he shut his eye before the pellet hit his face. 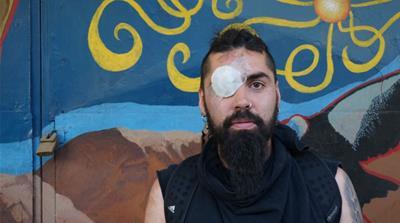 “At this moment, I was quite alone, the police had used tear gas to disperse people in Plaza Italia. I turned and they shot at my face. I was in shock, I saw blood and opened my eyes to see what had happened but I couldn’t see in one eye,” he tells Al Jazeera. “When I feel better I will return to the streets, because that’s what we have to do. The people are very supportive, and they are fighting, which is the main thing.”

The centre of conflict is full of toxic gases, and rocks and bullets fly back and forth. It’s dangerous for anyone, but the first responders say they are being directly targeted by police, putting themselves and the lives of those they are treating, at risk.

Earlier this month, a protester who suffered a heart attack during a demonstration in the Plaza Italia was being treated by Chile’s emergency health service SAMU while police continued to throw gas, water cannon, and use firearms. One of the medics was shot by a pellet in the leg. In a statement, Chile’s medical college said the aggression prevented them from providing the necessary care. The protester, 29-year-old Abel Acuna, later died in hospital.

“We are just doing humanitarian aid, and it’s like we are an enemy for them,” says Nunez. “We are in a time of peace, but if this happened during war, it would be a war crime.” 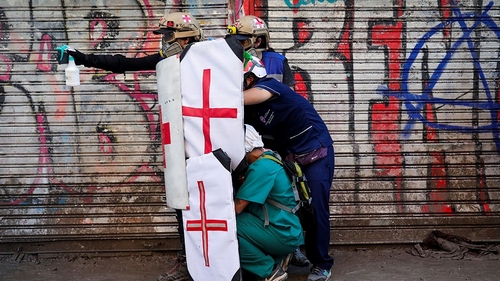 Nunez holds up an aluminium shield painted in white with a large red cross. It is dotted with bullet holes.

“These shields are distinct that we are first aid, but the police see that and they attack us directly. It’s not an attack by accident, it’s on purpose. They see us and shoot,” he says, before answering a call on the radio about another wounded protester.

It is not only the medical assistants who are being targeted, but human rights observers, too.

In October, a representative from Chile’s human rights institute, the INDH, who wear distinctive yellow jackets, was shot while observing a demonstration. At a recent protest, one woman in her 60s showed pellet wounds in her stomach and legs. She was representing a group of independent human rights observers, Cascos Azules, who wear blue helmets and jackets.

Last week, and for the first time since the unrest began, President Sebastian Pinera acknowledged abuses have been committed by police handling the protests. He said there had been “an excessive use of force” and “the rights of all were not respected”, adding there would be “no impunity” for those who committed crimes.

But his words so far have done little to quell the brutality, as the numbered of injured continues to rise, and peaceful protests are met with tear and pepper gas.

For the volunteer medics, they see their jobs as paramount in the effort to keep protesters alive and well.

If medics didn’t exist, Valenzuela says, “I think the protesters would die bleeding out.”