Firefighters hosed down a woman in her 20s after she fell victim to a suspected acid attack outside a tube station in south London on Tuesday, according to a witness.

The victim was taken to hospital. The Metropolitan police said via Twitter that her condition was not life changing or life threatening.

“Feel physically sick after walking past a poor innocent person getting hosed down by firefighters after being caught in the middle of an acid fight in Brixton,” tweeted witness Becky Reid. “So scary that this can happen on our doorstep.”

Police earlier tweeted that they had been called to Brixton Road at 1.45pm “following reports of a woman in her twenties being the victim of a noxious substance attack”.

A video of the aftermath of the attack, filmed from the roof of Morleys, the department store opposite Brixton tube station, showed a number of emergency vehicles lining the road, including a fire engine, an ambulance and several police cars. 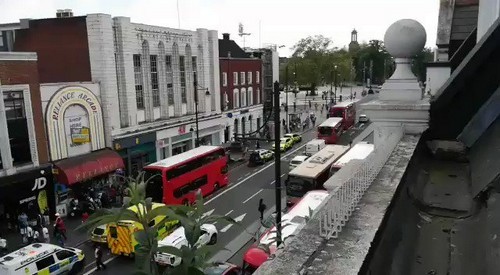 A London ambulance service spokesperson said: “We were called at 1:42pm today to Brixton road to reports of an incident.

“We sent an ambulance crew, an incident response officer and two single responders in cars. We also dispatched our hazardous area response team (HART) to the scene.

“We treated one person and took them to hospital.”