Weeks before the general elections in India, opinion polls were already showing that Prime Minister Narendra Modi had a fair chance of returning to office. He was riding on the crest of militaristic nationalism which gripped the nation after the military escalation with Pakistan in February. 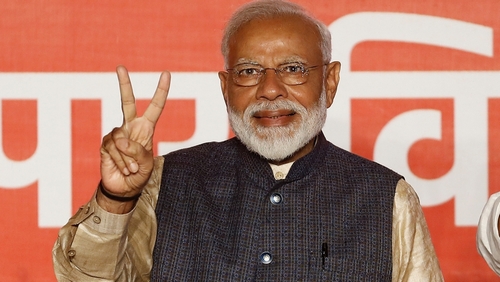 Indian Prime Minister Narendra Modi gestures towards his supporters after the election results were announced at the BJP headquarters in New Delhi on May 23, 2019 [Reuters/Adnan Abidi]

But few had expected the tidal wave with which Modi’s Bharatiya Janata Party (BJP) swept the opposition aside to win a second term. The official results released on May 23 revealed that the ruling party had gone beyond even what Modi and his most-trusted aide and party president, Amit Shah, had set as a goal: going above the 300 mark in the 543-member Lok Sabha, the Lower House of Parliament.

The BJP, along with allied parties, won 353 seats, paving the way for Modi to become the first prime minister in decades to return to government with another majority after completing his entire tenure in office.

With this electoral victory, the prime minister has not only secured another term in which once again he will pay little heed to coalition partners but has also won a popular mandate to push forward with his politics of Hindu nationalism.

At this point, there is sufficient ground for trepidation over what awaits India.

In March, Sakshi Maharaj, one of the saffron-clad BJP legislators representing the fringe section of the Hindu right-wing, made an ominous declaration.

“Modi is a tsunami that has brought awakening in the country. I believe there would be no elections in 2024 after this election is done,” he said.

Some have taken this statement to mean that in the coming five years Modi will consolidate power to the point where no other political power would manage to dethrone him. It has stirred fears that the BJP could consider pursuing changes in the law to jettison the parliamentary system, replacing it with a non-elective one.

Although Maharaj’s declaration was put down by the majority of BJP’s leaders as a rambling of an oddball, it still reflects the wide political ambitions of the ruling party.

At this point, fears about the future of Indian democracy appear justified and there are at least three reasons why.

First, Modi has made it clear that he would not rein in the Hindu far right. The BJP not only renominated Maharaj and a number of others like him who have a penchant for particularly toxic statements, but it also fielded a candidate who is currently facing “terrorism” charges.

Pragya Thakur, who is accused of organising the Malegaon bombing of 2008, ran in Madhya Pradesh state and won, becoming the first Indian MP facing “terror” charges to secure a seat in parliament. Despite nation-wide outrage, BJP’s senior leaders, including Modi, defended their decision to nominate her.

Thakur proceeded to embarrass them by glorifying the right-wing assassin of Mahatma Gandhi and Modi will have to decide in the coming days whether to expel her from the party or not. Inaction against her would suggest the party leadership speaks with a forked tongue and will continue promoting far-right activists into its second term.

The second reason for concern over Modi’s scale of victory is that the BJP does not have a good record of preserving the integrity of democratic institutions. During his first term, there have been a number of infringements against the judiciary and law enforcement. Judges and investigators have publicly complained about growing chaos within the system and increasing political pressure.

Modi has also made clear his exasperation with institutions, especially constitutional watchdogs, if they stand in the way of the executive’s unbridled powers. With an excessively centralised system of administration, introduced in 2014 and likely to be entrenched even further, there are worries that the checks and balances in the Indian democratic system would be weakened.

The future of the electoral process is also under question at the moment. During this election season, the election commission also came under the spotlight; by the time the vote concluded, it had become as much the subject of media reports, as political leaders and parties.

The third reason for apprehension over the future health of Indian democracy stems from Modi’s ideological roots and links with the Rashtriya Swayamsevak Sangh (RSS), the ideological fountainhead of the BJP, which Modi was a member of for years. The RSS runs on the principle of “ek chalak anuvartitva”, Sanskrit for “follow one leader”, and eschews democratic principles.

Modi is also a follower of RSS ideologue Deendayal Upadhyaya, whose treatise, Integral Humanism, is one of the philosophical guidebooks of the party. In his thesis, Upadhyaya emphasised the need to Indianise “western concepts of the nation, western secularism, western democracy”. Although he accepted political dialogue within the framework of Indian democracy, he wrote that “if we carry it to the other extreme, it could prove troublesome.”

All three factors – the promotion of the Hindu far right, the subversion of democratic institutions and the subscription to undemocratic ideology – will play an important role in the likely transformation of the country towards an authoritarian ethnic democracy under Modi’s second tenure. Those who will suffer the most in the process will be the minorities and disadvantaged groups.

Although sectarian strife is not new in India, since Modi took power in 2014, attacks – both rhetorical and physical – against religious minorities have intensified and have further alienated them from the state. Muslims, in particular, have increasingly become a target, as BJP’s Hindu nationalist stance has fuelled Islamophobia and encouraged “cow vigilantism” and conspiracy theories about “love jihad”.

Unsurprisingly, the BJP has not felt the need to provide political space or representation to Muslims; its strategy so far has been to politically bypass them and not recognise them as a distinct demographic group.

As Modi presses forward with majoritarian policies shaped by his Hindu nationalist views, multi-ethnic India will become increasingly divided. Attempts to homogenise the nation and secure the dominance of the Hindu majority and by extension, the BJP will have disastrous effects for the future of the biggest democracy on Earth.

The Gorky theatre will close for two years