Defiantly thrusting arms brandishing the campaign’s emblematic green handkerchief up in the air, the crowd converged before the National Congress, where the new project to legalise abortion up to 14 weeks of pregnancy was officially presented.

Buenos Aires – In scenes that were repeated across Argentina, thousands of people streamed along the arteries of the capital city of Buenos Aires on Tuesday for a massive demonstration that marked the next chapter in the fight to legalise abortion in the country.

Lara Ruiz, who stood outside the National Congress on Tuesday, knows just how close to home the fight for access to abortion can hit in Argentina.

A couple of months ago, while at home with her mother, a news item appeared on television about the new project. It led Ruiz’s mother to share with her 17-year-old daughter that when she was her age, she had tried to clandestinely abort an unexpected pregnancy.

“It wasn’t easy for her, and she had no one to turn to,” Ruiz told Al Jazeera. “She’s very proud that I am here, fighting for a right that she didn’t have.”

The new project is similar to the one that nearly won approval last year, passing the lower house, the Chamber of Deputies, but ultimately failing in the upper house, the Senate.

Abortion in Argentina is only legal in instances of rape or if the mother’s health is at risk.
This year’s legislation proposes that “women or other identities with the ability to gestate” have access to legal, safe, publicly funded abortions in the first 14 weeks of a pregnancy. It also seeks to decriminalise the termination of a pregnancy, which can currently land a woman in jail, and does not allow for a medical practitioner to declare a conscientious objection to the process.

“This is a question of health,” said Monica Menini, a feminist lawyer and member of the commission that drafted the new legislation, at a press conference at the Congress. “Because we put our bodies, and we die and we end up mutilated. Because it’s a question of human rights. Because we can’t keep allowing girls to give birth. Because it’s a question of social justice.” The press conference included representatives from a range of political parties in Argentina, and was punctuated by chants of “aborto legal ya” – “legal abortion now”.

Asea of green surrounded the front of the National Congress on Tuesday afternoon, as women formed small circles on the pavement, passing the traditional drink called “mate”, around, and applying green glitter or lipstick on each other’s faces. Tents and banners belonging to numerous left-wing political parties offered pamphlets on various campaigns, as chants, music and the smoke from grills serving up choripans (a typical Argentine sausage) rose in the air. 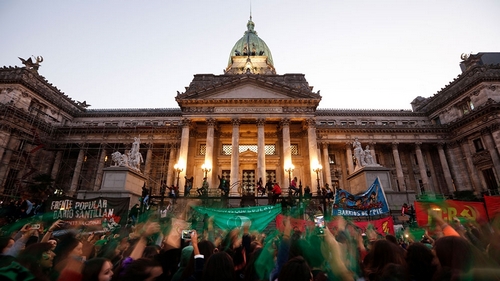 Activists with green handkerchiefs demonstrate to mark the revival of their campaign to legalize abortion, in front of the National Congress in Buenos Aires, on May 28, 2019 [Emiliano LasSalvia/AFP]

If approved by politicians, Argentina would become the most populous country to legalise abortion in Latin America, a region with strict anti-abortion laws rooted in Catholic doctrine.

That presence was also felt on Tuesday, with a small group of anti-abortion rights campaigners reciting the rosary through a megaphone at the corner of the square. Police had set up a line separating them from the main demonstration after pro-legalisation campaigners complained that they were being harassed by their opponents.

“The idea is to show that we are also here, rejecting the project, in a passive way,” said Facundo Gauto.

He added that anti-abortion rights activists were there to defend the life of the person who has yet to be born, but they also work in the area of prevention.

Rosana Fanjul, a member of the legalisation campaign, and the granddaughter of Dora Koladesky, one of the pioneers of the movement, said the fight is in her blood.

She told Al Jazeera the abortion debate is the axis on which all sorts of issues regarding women turn in Argentina.

“We’ve started questioning a lot of things, like abuse, how women are treated generally, our lack of representation in different areas of leadership. The question of equality has opened up in all sorts of arenas that have nothing to do with abortion,” Fanjul said.

Although she doesn’t think the political will is there this year to approve the project, because it is an election year, she believes Argentina’s leaders know legalisation is inevitable.

“The new generation have already assumed this as one of their rights, and they know that if it’s not this year, it will be the next one or the next,” she said. “They can’t delay this.”

Moscow developers will once again participate in “Black Friday”

What will Britain’s leadership change mean for Brexit?