More than 50 people were reportedly killed in an attack by an armed group on several villages in the Central African Republic’s (CAR) volatile northwest near the border with Chad, the United Nations said on Thursday. 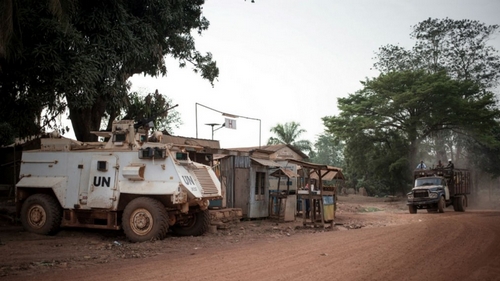 A MINUSCA armoured vehicle secures the hospital in Bambari, in the central-eastern part of the Central African Republic [File: Florent Vergnes/AFP]

The UN peacekeeping mission in the country, known as MINUSCA, condemned Tuesday’s attacks and its peacekeepers are undertaking “robust patrols in and around Ouham Pende prefecture” where the killings took place, UN spokesman Stephane Dujarric said.

The government issued an ultimatum to the leader of an armed rebel group known as 3R – which initially formed in 2015 to protect the minority Puehl population from attacks by mostly Christian Anti-balaka militias –  calling on him to hand over those responsible.

The group – Return, Reclamation, Rehabilitation, or 3R – attacked a number of villages in the northwest region Pahoua, seeking revenge for the killing of an ethnic Peuhl, government spokesman Ange Kazagui said at a joint briefing on Wednesday with the UN peacekeeping mission.

The government was calling on 3R leader Sidiki Abass to “arrest and hand over those responsible for this massacre to the authorities in the next 72 hours or risk being held personally responsible”, Kazagui said.

Lucien Mbaigoto, a legislator from the area, said that rebel fighters on the ground are not abiding by the peace agreements signed by their leaders, including one in February.

Human rights groups have blamed the 3R group for killing and raping civilians since 2015.

UN spokesman Dujarric said a joint mission by MINUSCA, the government, the African Union, and the Economic Community of Central African States is expected to deploy to the affected areas on Saturday “to defuse tensions, assist victims and displaced persons and reassure communities.”

He said the UN mission and the government are also engaging in dialogue on a local level “to ease tensions and prevent a retaliatory response by Anti-balaka”, referring to a cluster of armed groups that are mostly Christians and people who follow traditional animist beliefs.

Survivors of the attacks were quoted in a statement published by the medical charity, Doctors Without Borders (known by its French initials MSF).

“Gunmen wearing military fatigues and armed with Kalashnikovs arrived in my village and asked to see the community leaders to organise a general meeting,” says Alphonse, one survivor who was injured by gunshots and treated by MSF teams.

“The people then gathered under a mango tree,” he said.

“Then they started to tie us up. They tore my shirt to tie my arms,” Alphonse continued. “They piled us on top of each other, then started shooting. It felt like it was raining bullets.”

2 thoughts on “At least 50 killed in armed group attack on villages in CAR: UN”