A marketing ploy to get more shoppers into a toy store had to be abandoned after it caused huge queues and outbreaks of violence across Britain, with would-be consumers battling to get their hands on a bargain teddy bear.

Build-A-Bear Workshop was offering UK customers the chance to buy any bear, which can cost up to £52, for the price of their child’s age.

However, huge demand caused chaos at shops across the UK, with some forced to close their doors.

Children were left distraught after queuing for hours only to be told the bears had run out, and in other places there were reports of fighting between parents desperate to purchase one of the bears. 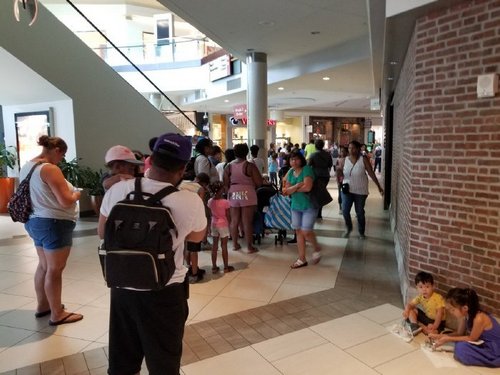 At White Rose shopping centre in Leeds, police were called when queues “about a mile long” formed. Stores at Sheffield’s Meadowhall shopping centre, as well as in Telford and Basingstoke, had to shut for the rest of the day.

Paul Shaw, a shopper in Leeds, told the BBC: “Crazy scenes at the White Rose – Build-A-Bear is in chaos.

“Queuing from the store, all the way outside, approximately five-hour queue. There are even police here trying to keep the peace.”

One newspaper in Wales even ran a live blog on the event. Hannah Dyer told WalesOnline she had been left “disappointed” after not being able to purchase a bear for her young son.

“I didn’t think it was very clear online this could happen. We told our little one he would be getting a bear today,” she said.

“I feel sorry for the guy who has to give out the bad news to everyone. I think they should have realised it was going to be this busy and honour the same deal tomorrow.”

Other parents vented their frustration on social media, saying their children were left “heartbroken” and criticising the organisation of the event.

One shopper got in the Build-A-Bear queue at 7.10am and said there were at least 50 people waiting when she left.
Now the wait is more like 6 hours pic.twitter.com/1b1YIYZ2si

In a statement on its Facebook page, Build-A-Bear Workshop said: “We understand our guests are disappointed and we are working to address the situation. We will reach out directly to our valued guests as soon as possible.”

At 1.30pm, customers in Cardiff were still queuing but the store was no longer allowing anyone in after it ran out of bears. Vouchers of £12 were being offered to those who were not able to get a bear.

After you: the psychology of queues and how to beat them – video explainer

A Build-a-Bear spokesman said: “Per local authorities, our Meadowhall, Telford and Basingstoke locations will be closed for the remainder of the day due to extreme crowds and safety concerns.

“Please note: all stores in the UK are reporting similar crowds and lines, and they can no longer accept additional guests for this event.

“The response to our pay your age day event has been overwhelming and unprecedented.”

How broadband Internet affects the duration of sleep