The passengers fastened their seatbelts and settled in for the 80-minute morning flight. Ethiopian Airlines ET0312 took off, much as hundreds of other planes making short-haul hops between neighbouring capitals do.

But this was no ordinary commercial flight: it was Ethiopian Airlines’ first in two decades to Asmara, the capital of Eritrea. In celebratation, according to journalists on board, champagne was served along with red roses. When the plane touched down, it was greeted with cheering and song.

The two countries have been locked in a tense military standoff since the border war that began in 1998 and caused the deaths of about 70,000 people.

A new political order in Ethiopia has given rise to an abrupt thawing in relations between the country with Africa’s fastest-growing economy and its young, underdeveloped but self-reliant neighbour.

Since taking over in April, the Ethiopian prime minister, Abiy Ahmed, has released dissidents from prison and liberalised parts of the economy. The state-run airline, telecoms and energy companies could all be sold off to “unleash the potential of the private sector”, a minister told Reuters on Wednesday.

In a historic visit, Ahmed flew into Asmara 10 days ago, and was met by his Eritrean counterpart, the long-time president Isaias Afwerki, with warm embraces and laughter. They agreed to implement a peace agreement signed in Algiers in 2000.

On Monday, Eritrea reopened its embassy in Addis Ababa, which had been frozen in time with its floral-patterned formal armchairs set around coffee tables, all covered in a thick layer of dust.

Family members of former embassy staff still smiled out from framed portraits on a dressing table, near which lay a crate of 20-year-old unopened beer bottles.

The resumption of regular flights is another symbol of the detente between the two countries. ET0312 will fly to Asmara and back daily, though the airline’s chief executive, Tewolde GebreMariam, said so many people wanted to go, they might have to put on extra planes.

“With the demand we are witnessing, I think we’re going to increase the frequency to twice a day, thrice a day and even more,” he said at a ceremony ahead of the maiden flight.

Ethiopian Airlines said tickets for the flight sold out in less than an hour, so quickly that another plane was arranged 15 minutes after the first. There were 300 seats on the plane, and many of the passengers were thought to have been separated from their families by the conflict.

“I’m super excited. You have no idea,” said Izana Abraham, an Eritrean who was born in Addis Ababa, and therefore deported from his home country during the war. “This is history in the making.”

Izana, 33, was going to visit his father. The two had been separated ever since his deportation until finally meeting in Dubai last year.

It will almost certainly be more difficult for passengers travelling the other way round: Eritreans will have to get passports and exit visas in order to leave the country.

“Family reunion,” Ethiopian Airlines tweeted, along with a pre-dawn picture of the pilots waiting in the cockpit. 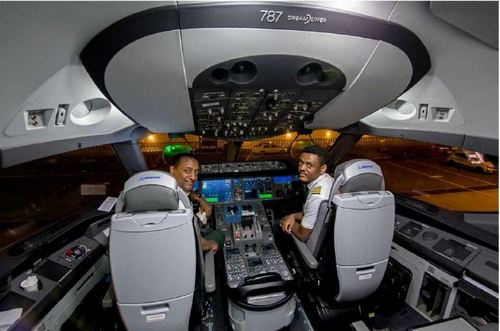 The clock is ticking for our historic flight to #Asmara. #Familyreunion #Ethiopia #Eritrea pic.twitter.com/EEWIo67uhj

Eritrea’s information minister tweeted the arrival of the flight in Asmara to a warm red-carpet welcome, with the flags of both nations displayed.

Sipping coffee as they waited for the flight were Ethiopia’s former prime minister Hailemariam Desalegn and the former first lady Roman Tesfaye. Desalegn told Reuters: “It is heartfelt joy. There has been hatred between us for the last 20 years. Now that has been reversed.”