Donald Trump has come close to suggesting the US might unilaterally withdraw from Nato if other member states fail to dramatically increase their spending on the military bloc.

According to diplomats, he plunged the Nato summit into chaos on Thursday by saying the US would “go it alone” if European states failed to boost their spending to at least 2% of GDP by January.

At an emergency press conference later, Trump appeared to row back from this threat, claiming Nato members had agreed to commit an extra $33bn (£25bn). He said it had been “a little tough for a little while” and he had told the Europeans he would be “very unhappy” if they did not up their spending “substantially”.

But he said a “tremendous amount of progress” had been made. Nato was now “much stronger”, he added, with spending “rocketing” upwards.

Could Trump withdraw the US from Nato?

Trump appeared to suggest he had the power to withdraw the US from Nato without the approval of the US Congress.

In fact, the organisation was established by a formal and binding treaty, which means Trump cannot use his executive power to pull America out of the alliance, in contrast to other international agreements such as the Iran nuclear deal or the Paris climate agreement, both of which Trump has withdrawn from. 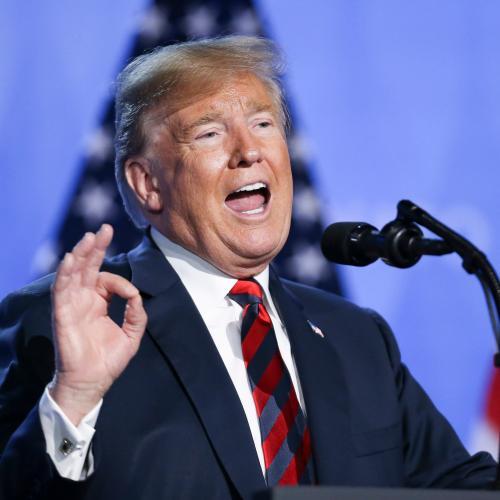 Trump would normally first need to win approval in the Senate and to persuade Republican senators that the move is necessary and in the US’s long-term security interests.

Unsurprisingly, Trump’s apparent threat caused dismay on Thursday among European allies. There is no certainty it would attract support in Washington from leading Republicans.

What would the consequences be?

Leaving Nato would be a seismic step, previously unthinkable, that would shake up a western alliance that has endured for more than 70 years. It would also be a boon to Russia and its leader, Vladimir Putin, whom Trump will meet on Monday in Helsinki.

Ultimately, a decision by the White House to abandon Nato could be challenged legally and end up in the US supreme court. Trump now has a majority in the court and is likely to succeed in winning approval for his conservative nominee, Brett Kavanaugh.

For now it appears that Trump’s threat is just that. In more emollient tones, Trump claimed on Thursday that the US’s commitment to Nato was “very strong and “remains very strong” following negotiations.

Jens Stoltenberg, the Nato secretary general, is now left with a headache: what to do if Trump returns to this theme of departure and how might the alliance survive were America really to leave?