Turkish authorities have ordered the arrest of 249 foreign ministry personnel over suspected links to the network of a United States-based religious leader accused of orchestrating an attempted coup in 2016, according to a statement by the prosecutor’s office in Ankara. 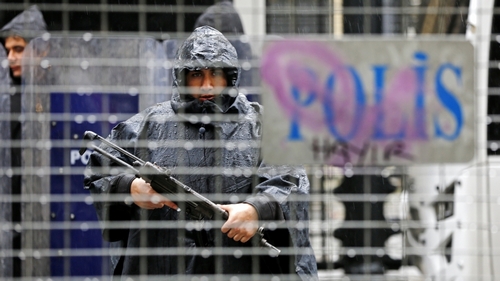 Prosecutors in the capital Ankara issued arrest warrants for the suspects prior to operations in 42 provinces [File: Cem Turkel/EPA]

At least 106 of the suspects have already been arrested in dozens of different provinces throughout Turkey as of Monday evening, the state-run Anadolu Agency reported, after prosecutors concluded that they were involved in cheating in the ministry’s past entrance exams.

Turkish officials have repeatedly said that members of the Gulen movement, a former ally of the government, have been running “a parallel state” within the civilian and military bureaucracy and pursuing their own agenda, including the foreign ministry.

Fethullah Gulen, the group’s leader who lives in exile in the US, rejects the claims.

Prosecutors in the capital Ankara issued arrest warrants for the suspects, who are past and present ministry personnel, on Monday, prior to operations in 42 provinces.

A judicial source told the AFP news agency that fourteen of the suspects were still serving in the ministry, while the rest had already been removed from their posts,

The suspects had entered the foreign ministry between 2010 and 2013, prosecutors said.

Authorities have carried out regular operations against the alleged followers of Gulen, in the wake of the coup attempt on the night of July 15, 2016.

He has lived in self-imposed exile in Pennsylvania since 1999, and Gulen denies allegations he was behind the coup.

More than 77,000 people have been jailed pending trial, while some 150,000 civil servants, military personnel and others have been sacked or suspended from their jobs as part of the post-coup purges.

Rights groups and Turkey‘s Western allies have voiced concerns over the crackdown, saying President Recep Tayyip Erdogan has used the failed overthrow attempt as a pretext to quash dissent.

The government has said the security measures were necessary due to the gravity of the threat Turkey faces.

In memory of a literary gangster