Thousands of protesters have rallied in the Algerian capital for a fourteenth consecutive week, demanding the removal of officials associated with former President Abdelaziz Bouteflika and the postponement of an election scheduled for July. 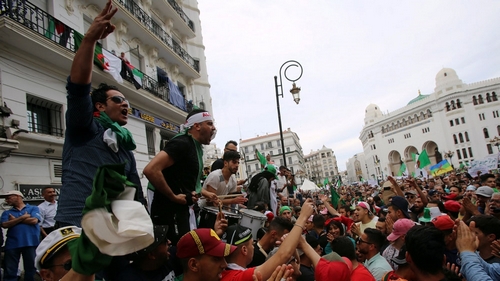 A presidential election is set for July 4, but protesters say a vote will not be valid until new, independent institutions are set up to oversee the process [Ramzi Boudina/Reuters]

Police on Friday tightened a security cordon around the iconic Grand Post Office in downtown Algiers where demonstrators had massed in previous weeks.

But that did not prevent people from gathering near the building where they chanted slogans against the country’s powerful army chief, Lieutenant General Ahmed Gaid Salah.

Demonstrators held up placards against Salah, accusing him of attempting to “thwart their revolution”.

Protesters chanted: “Tired of the generals!” and “Gaid Salah resign!”

Meanwhile, an activist with Algeria’s Socialist Workers’ Party wrote on Facebook he was being held “with some 20 other citizens in a police van”.

“Patrols crisscrossed the city and arrested anyone suspected of joining” protests, said Said Salhi, vice president of the Algerian League for the Defence of Human Rights, on Twitter.

Similar protests broke out in Algeria’s other main cities, including Annaba, Oran and Constantine on Friday.

After nearly two decades in power, Bouteflika resigned on April 2 amid a wave of massive protests across the country which were sparked by his decision in February to run for a fifth consecutive term in office.

The protesters want a transitional authority to be set up to review the constitution and allow for free and fair elections to take place.

They are also calling for the removal of Bouteflika’s associates, including Prime Minister Noureddine Bedoui and Interim President Abdelkader Bensalah, who were appointed by the leader days before he stepped down.

While Bensalah and Bedoui have not spoken much in public, Salah has given three speeches in as many days this week.

Salah on Monday warned against calls by protesters to defer the election, set for July 4, saying the election was the best way to get the country out of the current political crisis.

“Holding a presidential election could help Algeria avoid falling into the trap of a constitutional void, with its accompanying dangers and unwelcome consequences,” Salah said.

On Tuesday, the 79-year-old army chief called on protesters to “unite” with the army to prevent “instigators” from hijacking the demonstrations, and on Wednesday he reassured the public he had “no political ambition”.

A political source told Reuters news agency on Friday the interim government was expected to extend the current transition period to allow for time to prepare for an election.

It said the transition period, due to end a few days after the election, could be extended by at least three months.

“Time is running out and organizers have not finished preparations for the vote,” the source said.

Bolton to present evidence Iran was behind Gulf tanker attacks