Holidaymakers are experiencing long delays on flights, ferries and Eurotunnel trains as operators deal with the aftermath of extreme weather conditions in the UK and thunderstorms in Europe.

Ryanair cancelled 14 flights from Stansted on Saturday due to the knock-on effects of air traffic control restrictions from storms on Friday and staff shortages caused by ongoing industrial action in France.

Photos posted on social media showed long queues at the airport in Essex, with some passengers opting to sleep on baggage carousels overnight because of delays of up to nine hours. 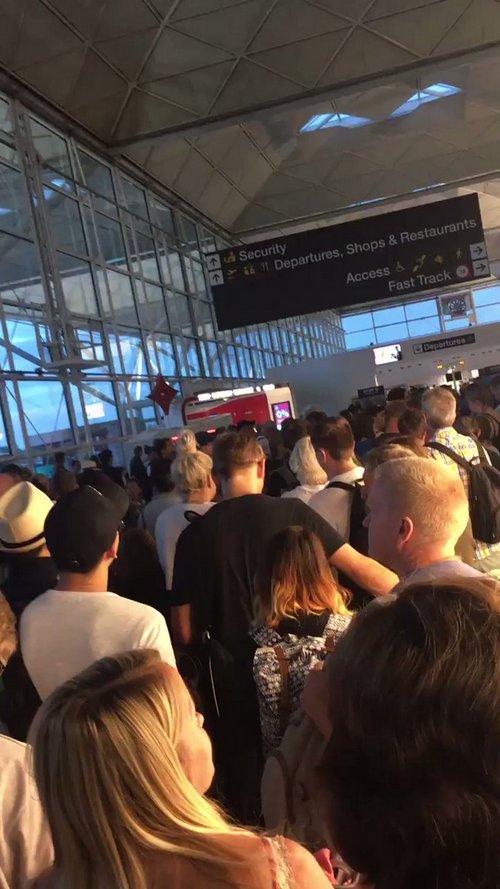 A Stansted spokesman said the queues were the result of passengers who had stayed overnight in the airport trying to rebook cancelled flights.

“There are no cancellations but there are delays because of the knock-on effect and some restrictions because of storm activity in Europe,” he said. “The advice is, if you are due to travel today, check with your airline about your individual flight.”

Passengers heading to France on the cross-Channel rail operator Eurotunnel have been told they could have to wait up to four hours at its Folkestone terminal. It told travellers not to make journeys unless they were absolutely necessary.

Families heading for summer holidays on the continent by ferry were also told to expect long queues on the roads into the port of Dover and a minimum two-hour wait to get through border checks.

P&O ferries advised passengers to bring plenty of drinks, snacks and entertainment for their wait.

The Met Office has issued a series of yellow warnings for rain, thunderstorms and wind on Saturday and Sunday, and said delays to public transport and difficult driving conditions on flooded roads were expected.

An amber severe weather warning for Northern Ireland was issued, with the Met tweeting that heavy rain and thunderstorms were affecting some areas on Saturday afternoon.

It also said thunderstorms in north-east Scotland could cause disruption on Saturday, while power cuts, sea swells and damage to campsites were possible in south Wales and south-west England in the early hours of Sunday.

Good morning, today there are yellow weather warnings for thunderstorms in NE Scotland and rain in Northern Ireland. You can keep up-to-date with the forecast in your area here: https://t.co/hQmWS6xFNb ^Eilidh pic.twitter.com/mVYCY7iKRy

Authorities have told the public to take care when swimming in rivers, lakes and the sea after police named the third person to have died this week after going swimming as 15-year-old Ben Quartermaine.

The teenager went missing in Clacton, Essex, after getting into difficulties in the sea on Thursday. Thames Valley police recovered the body of a man from the Jubilee river in Slough on the same day, and emergency services found the body of a 17-year-old boy who disappeared after getting into difficulty in a quarry lake in Bishops Itchington, near Leamington Spa, on Friday.

The knock-on effect of thunderstorms across London and eastern England on Friday continued to disrupt air travel, and further flight cancellations were expected because of storms in Europe.

Adverse weather across Europe is affecting flights in and outbound from Gatwick Airport, this may result in delays and cancellations. Please contact your airline for specific flight information before you travel to the airport.

Due to thunderstorm activity across Europe this morning, air traffic control restrictions are in place and some flights may be subject to delay or cancellation. Please check with your airline for the latest information: https://t.co/6VWLHSaL2H pic.twitter.com/I8pyqv8Ca1

A Heathrow spokeswoman said the airport was experiencing some minor delays.

Nats, the UK air traffic control service, which was due to handle 8,841 flights in 24 hours, said thunderstorms had affected flights across the UK.

“Nats is working closely with the airports and airlines to ensure safety and to continue providing the most efficient operation possible during this adverse weather period,” the service said.

“Dealing with bad weather is one of the most difficult things for air traffic controllers to manage. Its unpredictable nature means aircraft are not able to fly their usual routes, which results in unusual flight patterns.

“Thunderstorms are particularly disruptive as they effectively block large swathes of airspace because aircraft cannot fly through them. Passengers are advised to contact their airline for the latest information on individual flights.”