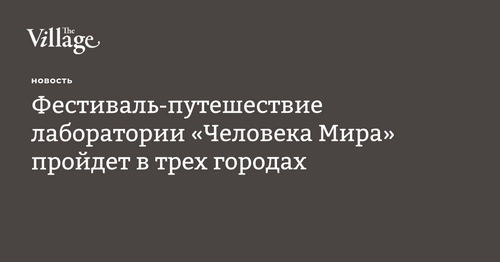 The laboratory of contemporary culture “person of peace” will hold a festival-a journey, which will take place in three cities – Petersburg, Moscow and Suzdal.

The first phase of the lab will be held on 28 July in St. Petersburg at the Mikhailovsky garden. There will be a scene-frame, inside of which during the day will unfold visually music from composer Peter aydu. According to the authors, in the process of performance can be traced to the development of mankind from the era of manual labor before the advent of cars.

The second act of the festival – a large-scale performance of “the Tube world”: the machines of different times to Park near the Tretyakov gallery on the Crimean shaft. Inside the cars the participants of the laboratory will play mini-plays, will conduct the installation and will share life stories. The event will take place on August 1.

Another step in the lab, which will be held on August 3 will be a trip from Moscow to Suzdal train, which offers 11 scenic spaces. The next day, August 4, in Suzdal will host the “Bench of Peace”. Artists will paint benches on the author’s sketches on the territory of the Suzdal Kremlin, and ceramists will create a sculpture on the river Kamenka. The festival will conclude with singing of folk music at the Church of the Intercession on river Nerl.

Source: the organizers of the festival