A second conservative Republican in as many House sessions blocked a $19bn disaster aid bill Tuesday that’s a top priority for some of President Donald Trump’s most loyal allies on Capitol Hill. 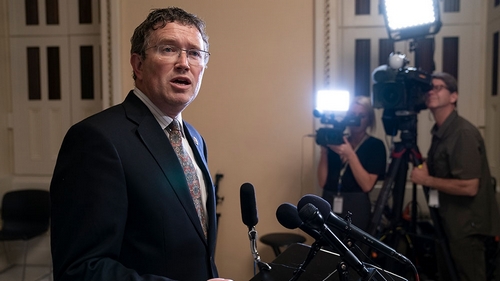 Following Senate passage of the legislation last Thursday by a vote of 85-8, House Democratic leaders had hoped to win a quick, unanimous approval of the bill on a voice vote and send it to Trump for his expected signature.

But with most politicians out of town for a recess until June 4, individual House Republicans have been able to block passage twice – once last Friday and again on Tuesday – by demanding an official roll call vote. Any roll call vote would have to wait until the full House returns to work next week.

Republican Thomas Massie said that if Democratic leaders like Speaker Nancy Pelosi thought the measure was so important, they should have kept the House in session in Washington, DC, late last week to slate an up-or-down roll call vote.

“If the speaker of this House thought that this was must-pass legislation the speaker… should have called a vote on this bill before sending every member of Congress on recess for 10 days,” Massie said as he blocked the measure.

“You can’t have bills passed in Congress with nobody voting on them,” Massie said. “That is the definition of the swamp, and that’s what people resent about this place.”

For months, politicians have been haggling over the disaster aid bill in response to hurricanes in the southeastern United States, severe flooding in the Midwest, devastating wildfires in California and other events.

The $19.1bn in the bill is intended to help farmers cover their crop losses and rebuild infrastructure hit by disasters, including repairs to US military bases.

On Friday, Representative Chip Roy, a first-term Republican, objected to the bill, citing concerns that the legislation did not include the $4.5bn Trump had requested to help address the surge of immigrants on the US-Mexico border.

Roy, a conservative, also complained that the cost of the bill was not offset by savings to other government programmes. His move was praised by Heritage Action, the advocacy arm of the conservative Heritage Foundation, which says Congress should plan for disasters that occur every year instead of approving “emergency” funds for them after the fact.

Congress regularly approves disaster aid bills without any cuts to other programmes. The measure is widely expected to pass the House once members return next week from a week-long Memorial Day recess.

A few months in St. Petersburg will be fined for non-payment of Parking

What’s the left’s problem with the EU?