Saudi Arabia’s king told an emergency Arab summit on Thursday that decisive action was needed to stop Iranian “escalations” in the region following attacks on oil assets in the Gulf, as American officials said a US military deployment had deterred Tehran. 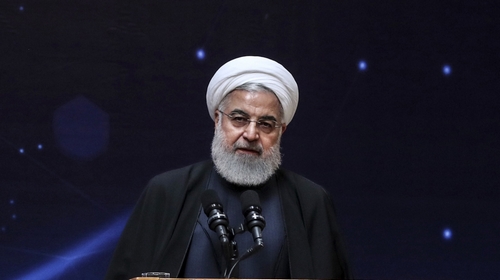 Iran has rejected what it calls “baseless” accusations made at an Arab summit, saying Saudi Arabia had joined the United States and Israel in a “hopeless” effort to mobilise regional opinion against Tehran, state media reported.

“Foreign Ministry spokesman Abbas Mousavi… rejected the baseless accusations by the heads of certain Arab countries… and said: ‘We see the Saudi effort to mobilise [regional] opinion as part of the hopeless process followed by America and the Zionist regime against Iran’,” state news agency IRNA reported on Friday.

The comments by King Salman Abdul Aziz came as Saudi Arabia hosted in Mecca emergency meetings of the Gulf Cooperation Council (GCC), the Organisation of the Islamic Conference (OIC) and the Arab League to counter what it said was Iran’s growing influence.

A Gulf-Arab statement and a separate communique issued after the wider summit both supported the right of Saudi Arabia and the United Arab Emirates (UAE) to defend their interests after the attacks on oil pumping stations in the kingdom and tankers off the UAE.

But in a sign of regional tensions, Iraq, which has good ties with neighbouring Iran and the US, said it objected to the Arab communique, which stated that any cooperation with Tehran should be based on “non-interference in other countries”.

Reporting from Tehran, Al Jazeera’s Zein Basravi said Iran knows that the final communique at the meeting is “not necessarily the real opinion of all the members of the GCC”.

“He [Mousavi] also rejected and condemned allegations against Iran for interfering in the affairs of neighbouring countries, as the Saudis said in the meeting,” he said.

Basravi said the Iranian leader also said “Saudi Arabia was misusing its role as host for the OIC meeting to spread… divisive policies among Muslim leaders”.

Addressing Arab and Muslim leaders earlier, King Salman pressed the international community to “use all means to stop Iran from interfering in other countries’ affairs”.

“This is naked aggression against our stability and international security,” the Saudi ruler told the gathered officials.

Iran’s “recent criminal acts… require that all of us work seriously to preserve the security… of GCC countries,” the king added

In his opening remarks, Saudi Foreign Minister Ibrahim al-Assaf said the alleged sabotage of oil tankers off the coast of the United Arab Emirates and drone attacks on a Saudi oil pipeline by Yemen’s Houthi rebels in recent weeks threaten the global economy and endanger regional and international security.

“We should confront it with all means of force and firmness,” he said.

An Iranian official was at the meeting where Assaf spoke.Tehran has denied any involvement in the attacks.

John Bolton, a top US security official, alleged on Wednesday Iranian mines were “almost certainly” used in the tanker operation. He provided no proof, however.

An Iranian official dismissed Bolton’s remarks as “a ludicrous claim”.

Animosity has risen between the US and Iran after Washington pulled out of a multinational nuclear deal with Tehran, reimposed sanctions and boosted its military presence in the Gulf.

King Salman invited Qatar’s Emir Sheikh Tamim bin Hamad Al Thani, whose country is home to the largest US military base in the region, to the Mecca summit.

Thomas Pickering, a former US ambassador the UN, told Al Jazeera the Qatari prime minister’s presence at the summit was an important step.

“The invitation has opened the door more than just a little bit. His [Sheikh Abdullah’s] presence there and the handshake is a sign that Saudi Arabia wants unity in the Gulf Cooperation Council and that unity is spreading,” said Pickering.

Analysts said the emergency summit will be watched closely for whether or not the Saudis will endorse Qatar as a mediator in the dispute with Iran the same way the US has.

Earlier this month, Al Jazeera reported that Qatar’s foreign minister had held talks with his Iranian counterpart in Tehran, aiming to defuse the escalating tensions in the Gulf.

“Washington seems to have bet on Doha to de-escalate by opening back channels with Tehran. The question is whether Saudi and especially UAE can agree on Doha as a mediator,” Andreas Krieg from King’s College London told Al Jazeera.

“The fact that the Saudis contacted the emir of Qatar directly suggests that the tension with Iran is taken very seriously in Riyadh. So, the kingdom is ready to build a broader-than-usual consensus on how to deal with Iran,” Krieg said.

Gulf states have a joint defence force under the Gulf Cooperation Council (GCC), but the 39-year-old alliance has been fractured by the Qatar blockade.