Iranian Foreign Minister Mohammad Javad Zarif has hit out at the United States after President Donald Trump said Washington was not looking for “regime change” in Iran but was only interested in preventing Tehran from getting nuclear weapons. 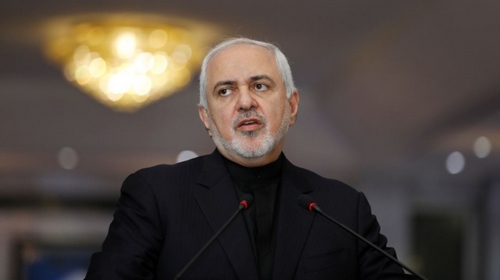 In a Twitter post on Monday, Zarif insisted Iran was not seeking nuclear weapons and accused the US, which has recently beefed up its military presence in the Middle East, of causing regional tensions and “hurting the Iranian people”.

His comments came after Trump said on Monday during a trip to Japan that a deal with Iran on its nuclear programme was possible, crediting economic sanctions for curbing activities Washington has said are behind a spate of attacks in the Middle East.

“We aren’t looking for regime change – I just want to make that clear. We are looking for no nuclear weapons,” Trump told reporters during a news conference with Japan’s Prime Minister Shinzo Abe in Tokyo.

“It has a chance to be a great country with the same leadership.”

In response, Zarif tweeted: “Actions – not words – will show whether or not that’s @realDonaldTrump’s intent,” Zarif added, referencing the US president’s Twitter handle.

Iranian President Hassan Rouhani said in October the US was seeking “regime change” in Iran, adding that the Trump administration was the most hostile that the Islamic Republic had faced in its four decades.

Al Jazeera’s Zein Basravi, reporting from Tehran, said Iranian leaders were likely “to see the softer rhetoric from Trump as insincere, pointing to aggressive economic sanctions and a military build-up in the region as the true measures of US intentions towards to Iran”.

He added: “Experts say that in the absence of any real goals, talking with the US would be just for the sake of talking. So as long as a reduction of sanctions remains highly unlikely Iranian leaders are expected to maintain the policy of not negotiating with the Trump White House.

“For the moment, they are focusing their diplomatic energy on reaching out to regional partners to try to strike up some kind of security cooperation that endeavours to elbow out the US.”

Tensions have risen between the two countries after a US decision earlier this month to send an aircraft carrier attack force and B-52 bombers in a show of force against what Washington’s leaders said they believed was an imminent Iranian plan to attack US assets.

The US, a firm backer of Tehran’s regional rival Saudi Arabia, has also announced plans to deploy an additional 1,500 troops to the Middle East, prompting fears of a conflict.

It says the latest reinforcements are in response to a “campaign” of recent attacks including a rocket launched into the Green Zone in Baghdad, explosive devices that damaged four tankers near the entrance to the Gulf, and drone attacks by Yemeni rebels on a key Saudi oil pipeline.

Iran has denied any involvement in the attacks.

Trump, on a four-day visit to Japan, welcomed Abe’s help in dealing with Iran after broadcaster NHK said the prime minister was considering a trip to Tehran as early as mid-June. Iran said a visit was unlikely in the near future.

“I know for a fact that the prime minister is very close with the leadership of Iran, and we’ll see what happens,” Trump said.

At his joint news conference with Trump, Abe said Japan would do what it could on the Iran issue.

Trump last year withdrew the US from a 2015 international nuclear deal with Iran, and is ratcheting up sanctions seeking to end Iran’s international sales of crude oil and strangle its economy.

Japan was a major buyer of Iranian oil for decades before US sanctions which Trump said were taking effect.

“They were fighting in many locations,” he said of Iran. “Now they are pulling back because they have serious economic problems.”