Brexit is a disaster. There is no compromise with the Brexiteers. There never has been. There never will be. For my money here we stand and fight.

This is from the Yorkshire Post’s Arj Singh.

SCOOP I understand Chris Grayling was caught up in train delays as the Cabinet visited the North of England.https://t.co/zJofJImTec

In his UQ on the Islamic State pair facing trial in the US, Ben Wallace, the security minister, said the British could be seen as “hypocrites” if they objected to the men facing the death penalty in the US. He explained:

I also am aware as an ex-soldier that all states including states that oppose the death penalty use lethal force when it has to do so to keep itself secure.

We risk being seen as hypocrites if we say on the one hand we will not ever make an exception for assurances but on the other hand we will use lethal force in battlefields to kill people without due process.

Margaret Hodge has posted on Twitter a copy of the letter she received from Labour HQ saying she was subject to a disciplinary inquiry for calling Jeremy Corbyn “antisemitic” last week, and a copy of the reply sent by her lawyers saying the procedure was unfair. There is a thread with all the paperwork, starting here. 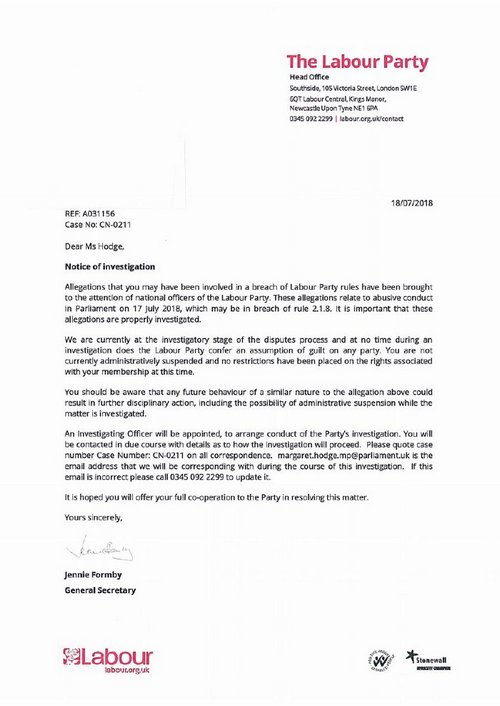 Here is the letter I received from the Labour Party and the letter my lawyers have sent in reply. 1/7 pic.twitter.com/VwXRU93SBa

This is from France Crook, the chief executive of the Howard League for Penal Reform, on the Javid no death penalty assurance decision. 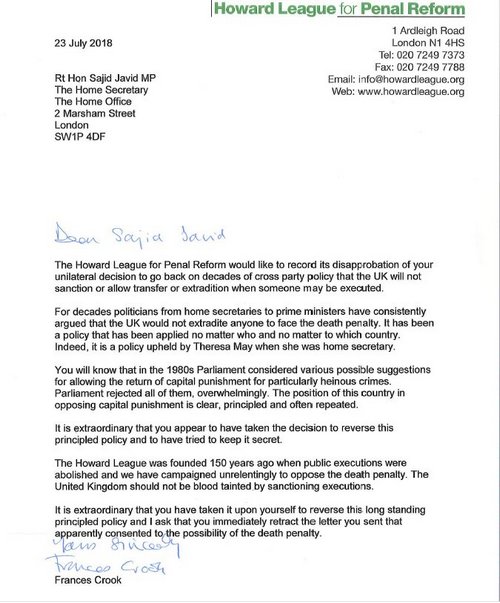 In the Commons the pairing UQ is still going on. Labour’s Stella Creasy asked David Lidington to say whether or not, as reported, Julian Smith, the Conservative chief whip, asked other MPs to break pairs on Tuesday last week. If he did, it wasn’t a mistake, but a policy, she said.

Lidington said no other pairs were broken.

That doesn’t answer the question. The other MPs allegedly asked by Smith to break a pair reportedly ignored his request, in some or all cases having been given contrary advice by another whip.

In the Lords peers have also been been talking about the Sajid Javid decision to accept the death penalty as an option for the two jihadists facing trial in the US. Lord Tebbit, the former Conservative party chairman who was badly injured in the 1984 Brighton bomb, said he backed Javid’s decision. He said he was glad Javid had “given the nod to the American authorities to prosecute some particularly vile terrorists and leave them to face the penalty laid down by the democratic country of the United States of America”.

As a victim of terrorism myself I am always a supporter of the victims, not of the terrorists.

Lord Ahmad of Wimbledon, who was replying on behalf of the government, said the government “stood resolute and committed to the principle” of opposing the death penalty.

Lidington is replying to Carmichael.

He says Brandon Lewis is a minister in his team, so it is appropriate for Lidington to be replying, he says.

He says Lewis was not told he was paired with Swinson.

He says asking Lewis to vote was a mistake.

Every other pair that night was honoured, he says.

He says the PM and the leader of the Commons were not consulted.

Carmichael says Julian Smith should be replying to this UQ. There are serious questions outstanding about what happened last week, and he says Smith is the only person who can resolve them.

He says initially he was quite relaxed when he found out that Brandon Lewis had voted last week. He says he knows mistakes happen. But when he found out it was the chief whip’s decision, he got worried. He says Julian Smith’s claim he did not now this was a pregnancy pair neither explains or excuses what was an act of bad faith. A pair is a pair, he says.

He asks when the decision was taken to cancel the Lewis/Swinson pair. When were the whips offices told? Did Lewis know he was paired with Swinson? When was the PM told pairing arrangements would be broken? Was the PM told about Smith cancelling the pair before she told MPs it was an honest mistake? When Theresa May said it was a mistake, was that because a pair was broken, or because it was a pregnancy pair? If the latter, does that mean the government now endorses breaking other pairs.

Alistair Carmichael, the Lib Dem chief whip, is now asking an urgent question about pairing. He tabled his question to the chief whip, but David Lidington, the Cabinet Office minister, is replying.

Lidington starts by restating the government’s apology for the pair being broken last week. He says Julian Smith, the Conservative chief whip, and Brandon Lewis, the Conservative chair who broke a pair with Jo Swinson in two very tight votes last Tuesday, have apologised. He says Carmichael accepted those apologies.

He says almost 2,000 pairs have been agreed since the general election. He says the government’s record on keeping pairs is better than the record of some other parties.

He says MPs will get the chance to debate a plan to introduce proxy voting in September.

Wallace says the two individuals are not under UK control. This case is all about a US request for evidence about them.

This is from Yvette Cooper, the Labour chair of the Commons home affairs committee.

The DUP’s Sammy Wilson says it would be a betrayal of the national interest if the UK did not supply evidence to the US to help bring these men to court.

Labour’s Steve McCabe asks for an assurance that evidence obtained by torture will not be used against the two jihadists.

Wallace says the UK will not be supplying evidence to the US that was obtained as a result of torture.

Wallace says the government is opposed to Guantanamo Bay because it sets outside the US justice system. He says the decisions taken in this case are different.

Tom Tugendhat, the Conservative chair of the Commons foreign affairs committee, says the two men should have been charged with betrayal.

Labour’s Stella Creasy asks if the government will publish its legal advice on this? And she ask if the prime minister agrees with the decision.

Wallace says the government does not publish its legal advice. He says the prime minister was made aware of the decision and “agrees” with it.

The payment of Parking by SMS failed