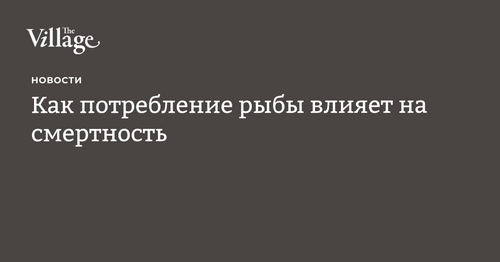 Chinese scientists of Zhejiang University found that the consumption of fish and other foods rich in omega-3 polyunsaturated fatty acids (omega-3-Pufas), is associated with reduced mortality. The corresponding article published in the scientific Journal Journal of Internal Medicine.

For 16 years scientists have analyzed the power data from more than 420 thousand people. On average, men consumed 14.56 grams of fish per day, and women of 10.89 grams. During this time, from various causes died 54 thousand men and almost 31 thousand women. Thus the consumption of large amounts of fish and omega-3 Pufas was associated with reduced mortality.

Scientists have found that men who consumed the most fish on average 10 % less likely to die from cardiovascular disease and 37% less from diseases of the liver. Among women who also consumed fish, were 38% fewer deaths from Alzheimer’s disease.

Method of cooking fish has also affected the relationship between consumption and mortality. However, this relationship was found only in women: the consumption of fried fish was associated with increased mortality from all causes.

The researchers came to the conclusion that fish consumption and omega-3 Pufas positively affect health and reduces the risk of death from various diseases. Consume fish only in the absence of contraindications and allergic reactions. Alternative sources of omega-3-Pufas can be Chia seeds, flax oil, spinach and seaweed.

Without court to block pages with “justification of extremism”