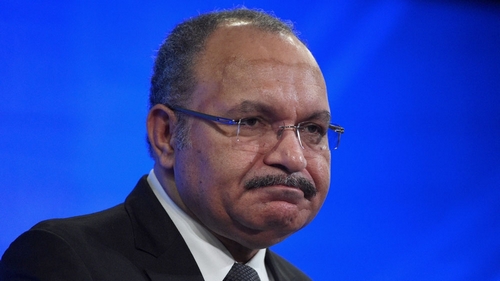 O’Neill, 54, survived a vote of no confidence earlier but had been under pressure over a gas deal gone sour [Mick Tsikas/EPA-EFE]

O’Neill – who had been in power since 2011 – handed over the reins to Julius Chan, who has twice been prime minister, PNG broadcaster EMTV reported.

“It is important that we maintain a certain amount of stability. We have heard the calls and we have agreed for a change of government,” O’Neill told reporters.

Chan said the transition was to ensure stability in the Pacific nation.

“I want to thank Prime Minister Peter O’Neill for all that he has done to bring this country [to where it is] today,” he told reporters.

“Men and women of Papua New Guinea… we have very short memories. Tomorrow you will look back and see all the things that he has done. But like life itself, you just got to move on.”

Defections from the ruling coalition have been going on for weeks and on Friday at least nine members switched sides, according to two ministers who were among them.

O’Neill, 54, survived a vote of no confidence earlier this month but had been under pressure following the signing of a multibillion-dollar deal for a liquefied natural gas (LNG) project with France’s Total and United States firm ExxonMobil earlier this year.

Opposition politicians said on Friday they would push for investigations in Australia and Switzerland into an $830m loan arranged by finance group UBS if there was a change of government, the Australian Financial Review reported.

A report by the Ombudsman Commission of PNG into the 2014 deal – which allowed the country to borrow from UBS to buy a 10 percent stake in Australian Stock Exchange-listed energy firm Oil Search – is scheduled to be tabled in parliament next week.

Oil Search, in turn, used the money to buy into the Elk-Antelope gas field being developed by Total.

PNG is estimated to have lost $287m on the deal after being forced to sell the shares when the price fell in 2017.

“I will look forward to working with the new prime minister of PNG in the same way I have enjoyed such a strong friendship and relationship with Peter O’Neill,” he told reporters in Canberra.