New Delhi, India – India is counting about 600 million votes after its seven-phase elections drew to a close on May 19, with incumbent Prime Minister Narendra Modi tipped to win a second term in office.

The vote count started at 0800 local time (0230 GMT), and results are likely to be clear later in the day. If there is a clear trend, this should be evident by around midday (0630 GMT).

More than 67 percent of 900 million eligible voters cast their ballot in the mammoth elections – spread over six weeks – the highest ever voter turnout in the country’s independent history.

Exit polls have predicted a clear majority for Modi in the 545-member Lok Sabha, the lower house of parliament, but such projections have been wrong in the past. 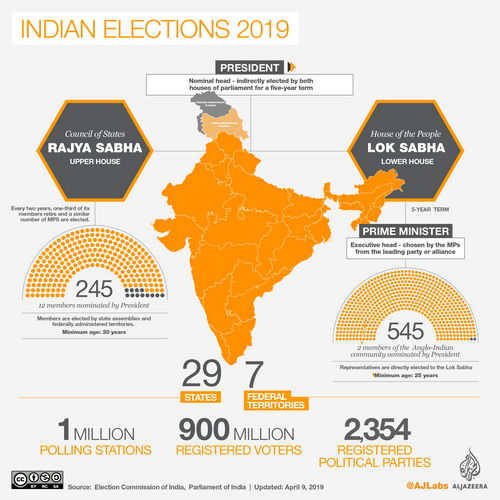 Elections were held for 542 constituencies, as polls in the southern constituency of Vellore were rescinded. Two seats are nominated by the president.

The party or coalition that wins a simple majority (272 seats) is invited to form the government. The MPs from the winning coalition then select the country’s prime minister.

With results of the world’s largest election barely hours away, the big question on everybody’s mind is: can Modi and the ruling Bharatiya Janata Party (BJP) beat anti-incumbency and form a second consecutive government?

Activists and many senior editors fear another term for Modi will boost hardline Hindu groups, who have been accused of increasing attacks on minorities, particularly Muslims, in the past five years.

Observers believe that the opposition, with the Indian National Congress in the lead, along with an array of powerful regional parties, have a shot at power only if the BJP loses in the northern Hindi-speaking states.

In the bellwether state of Uttar Pradesh, regional heavyweights Samajwadi Party (SP) and the Bahujan Samaj Party (BSP) pose the biggest challenge to the BJP, which won 71 out of 80 seats in the 2014 parliamentary elections.

The party swept to power on the back of a “Modi wave” in 2014, winning 282 of 543 seats in parliament and forming the most powerful central government in decades.

If exit polls are to be believed, the BJP and the coalition it leads, the National Democratic Alliance (NDA), will return to power with a thumping majority.

Buoyed by the survey predictions, Prime Minister Modi and his party chief Amit Shah have already started planning the course of the next government.

The BJP ran a presidential-style campaign with Modi as its mascot, similar to the 2014 campaign.

“These elections were unique as the campaign was people-driven and a strong public sentiment to re-elect Prime Minister Narendra Modi has given a huge push to the BJP’s poll prospects,” BJP spokesperson GVL Narasimha Rao told Al Jazeera.

The BJP appeared to be on the back foot in the early days of the campaign as it was attacked on multiple fronts by a resurgent opposition led by the Congress and regional parties.

The opposition raised the issue of agrarian and rural distress and accused the government of creating the worst unemployment crisis in 45 years.

The Congress party leader Rahul Gandhi, in particular, made accusations of corruption in the purchase of French Rafale fighter jets.

Salman Soz of the Congress accused the BJP of running a divisive campaign.

“It was a campaign devoid of any discussion of issues on the part of the BJP because the PM doesn’t want to talk about his record,” Soz told Al Jazeera.

However, the BJP made a comeback following a surge in nationalist sentiment triggered by Indian air attacks inside Pakistan in retaliation to a suicide attack in Indian-administered Kashmir and effectively turned its campaign into a referendum on national security.

The 2019 elections saw the BJP returning to its core ideology of Hindu nationalism as it fielded Sadhvi Pragya Thakur – who is facing terror charges for plotting bomb attack on Muslims – as its candidate from the central Indian city of Bhopal.

Even as the BJP prepares to take office, opposition parties have raised concerns over the conduct of the country’s powerful electoral body during the long drawn elections.

At least 22 opposition parties submitted a memorandum to the Election Commission on Tuesday demanding that the paper slips or Voter Verifiable Paper Audit Trail (VVPAT) generated by the Electronic Voting Machines (EVMs) be counted first. They fear that EVMs might have been manipulated.

Complaints of security breaches in the strong-rooms where EVMs have been stored have come in from different parts of the country and reportedly cast a shadow over these elections.