European Union (EU) leaders are descending upon Brussels to formally begin the horse-trading over establishing parliamentary groupings and choose leaders of the continent’s most powerful institutions. 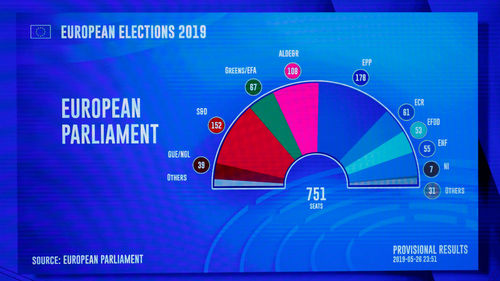 In discussions over dinner on Tuesday, presidents and prime ministers in the EU will choose the head of the European Commission (EC) for the next five years. The EC is currently led by Luxembourg politician Jean-Claude Juncker.

They will also discuss who should replace Polish leader Donald Tusk as European Council president. The next head of the European Central Bank is also on the agenda.

An EU-wide election last week returned a European Parliament with a splintered centre and gains by pro-EU liberals and greens as well as Eurosceptic nationalists and the far right.

Manfred Weber, the centre-right candidate for EU Commission chair, said his party was ready to make “all necessary compromises” over the appointment of the most powerful figure in the bloc, Reuters news agency reported.

Weber’s comments came after the main groups of the EU parliament agreed on the principle that the new EU executive president should be a leader who had campaigned for the job.

Meanwhile, Ska Keller, leader of the European Greens, said on Tuesday it was “high time” the commission’s head was a woman.

The Social Democrats want Frans Timmermans to take the role, while Liberal leader Guy Verhofstadt said it was important the next EC president represents a “broad, pro-European majority”.

Europe’s domestic political parties fight the European Parliament elections on their own nations’ turfs, and group together in a loose, ideologically-affiliated coalition in the parliament itself.

Among the recent groupings, the centre-right European People’s Party is the largest bloc in the European Parliament with 180 seats, followed by the centre-left Socialists and Democrats (S&D) grouping with 146 seats.

The Alliance of Liberals and Democrats, slightly to the left of the S&D, holds 109 seats, while the Greens have 69. The European United Left has 39 seats.

The Eurosceptic European Conservatives and Reformers bloc has 59 seats, with a further 58 held by the anti-immigration Europe of Nations and Freedom of Marine Le Pen, Geert Wilders and Matteo Salvini, while 54 seats are held by Europe of Freedom and Direct Democracy bloc, founded by Nigel Farage.

But all these blocs are open to days of trading and alliance building. Italy’s far-right interior minister Matteo Salvini wants to build consensus around his anti-immigrant, anti-Muslim rhetoric and is hoping to group at least 100 MEPs into his bloc, with a target of 150, to make it a real political force within the parliament.

The media momentum for war with Iran