Indian Prime Minister Narendra Modi is on his way to a second term in office after the ruling Bharatiya Janata Party (BJP) took an unassailable lead in the South Asian country’s general elections, according to preliminary results. 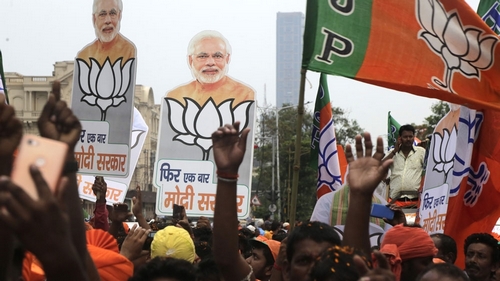 The party came to national prominence in the late 1980s after it led a nationwide movement to build a temple in Ayodhya town [File: Bikas Das/AP]

The Hindu nationalist party is leading in 294 seats out of 542 seats, with its main rival, the Indian National Congress (INC), ahead in 50 seats, according to the latest data from the Election Commission of India.

However, it was not clear what percentage of the estimated 600 million votes had been counted.

Here is what you need to know about the BJP.

Origins of the BJP

The Hindu nationalist BJP (Indian People’s Party) was founded in 1980, but it actually emerged from its precursor – the Bharatiya Jan Sangh (BJS).

The BJS was founded in 1951 by Syama Prasad Mukherjee, a member of the Rashtriya Swayamsevak Sangh (RSS) – a Hindu supremacist organisation that wants India to be defined as a Hindu nation.

Modi, like many leaders of his party, is a lifelong member of the RSS, which was formed in 1925, and is inspired by European ethnonationalism and fascism.

BJS leader Atal Bihari Vajpayee formed the Janata Party to oppose the emergency imposed in 1975 by then Prime Minister Indira Gandhi of the Congress.

In 1977 general elections, the Janata Party swept the polls and its leader Morarji Desai became the prime minister. The Janata Party government, however, collapsed two years later due to political bickering.

Vajpayee, along with another BJS leader Lal Krishna Advani, founded the BJP in 1980.

The BJP advocates the ideology of Hindutva (or Hinduness), which insists that multireligious and multiethnic India is fundamentally a “Hindu Rashtra” (Hindu Nation). Hindutva seeks to define Indian culture in terms of Hindu values.

The party came to national prominence in the late 1980s after it led a nationwide movement to build a temple in place of a mosque in Ayodhya town built during the reign of Mughal emperor Babar.

In 1992, the BJP and another right-wing organisation Vishva Hindu Parishad (World Hindu Council) rallied more than 100,000 Hindu mobs which tore down the 16th-century mosque.

The demolition sparked nationwide religious riots that left about 2,000 people dead, and created a fissure in Hindu-Muslim relations that have not recovered.

In this election, the BJP ran a divisive campaign, with its leaders accused of indulging in anti-Muslim rhetoric to polarise votes.

The BJP and its allies came back to power again after 1998 elections, with Vajpayee becoming prime minister for the second time. However, after 13 months in office, the Vajpayee government collapsed yet again after its main ally pulled out of the government.

In 1999, the BJP formed the National Democratic Alliance (NDA), a coalition of over 20 parties, which went on to win the elections. Vajpayee came to power for the third time as part of the NDA coalition.

But in 2004 elections, the United Progressive Alliance (UPA) led by the Congress party came to power. The UPA returned to power in 2009 elections on the back of impressive economic growth.

Modi led the BJP to a landslide victory in 2014 on an anti-corruption plank. Before taking over as the prime minister, he was the chief minister of Gujarat state for 13 years.

The right-wing party won 282 seats gaining absolute majority – the first party to do so in three decades.

In the past five years, India recorded a “disturbing” number of hate crimes, including assault, rape and lynchings.

“We are receiving reports that indicate increasing harassment and targeting of minorities – in particular, Muslims and people from historically disadvantaged and marginalised groups, such as Dalits and Adivasis,” Bachelet said in her annual report to the UN Human Rights Council in Geneva in March.