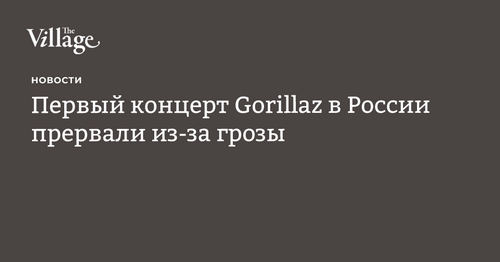 Festival Park Live was interrupted because of heavy rain and thunderstorms in Moscow. The audience announced the completion of the event in Gorky Park during the band Gorillaz, the first in Russia. Headliners of the second day of the festival managed to play a few songs before leaving the stage.

According to “Rain”, the rain started after 35-40 minutes after the start of Gorillaz performances. Because of the strong wind the water flooded the stage, where the equipment and screens. After that, the musicians interrupted the speech. While one of the spectators saidthat the crowd was struck by lightning, causing one of her friends hand went numb.

The time of the abolition of the Gorillaz concert in Moscow

To everyone at Park Live Festival: We are are gutted at being stopped from playing by the storm.. it's beyond our control.. your safety must always come first.

Gorillaz concert was fucking amazing, although ended because of a thunderstorm on the 11th track of the 25 planned.
The Internet already seems to be havebury and organizers are ready to burn at the stake

As reported TASS, after the announcement of the end of the concert the visitors remained in place in anticipation of the continuation, but half an hour later the crowd began to disperse.

Today the only concert @the gorillaz in Russia for half of the show turned, due to the fact that the scene under the shower leaked and flooded equipment. I konesh no Cho no hint, neither on the level of organization and security, not unreasonable expectations of the fans, not#gorillaz

The first Gorillaz concert in Russia was in the middle. Went a hell of a downpour that direct it was clear that no canopy stage and the instrument will not save. And lightning was hitting all around, one hit a tree in the Park, people were not injured like, but right near the part of the output

the funny thing is that when they left, it rained for a maximum of 6-7 minutes, the remaining 40 we just stood and waited for a wet but without the thunderstorms
and then they said that the storm and get the fuck out

Earlier, the Ministry of emergency situations has issued a storm warning due to thunderstorms, rain and strong winds with gusts up to 20 meters per second, which will continue in Moscow until the end of July 28.