James Marape, a former finance minister and critic of a major global gas development deal, has elected by parliament as the new prime minister of Papua New Guinea (PNG). 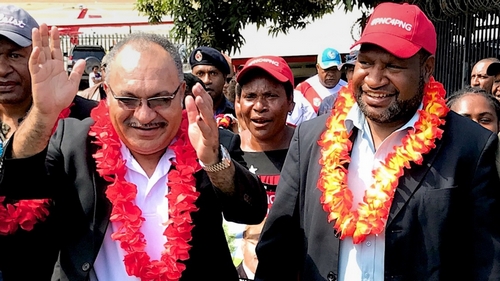 His election on Thursday came after weeks of political turmoil that saw his predecessor, Peter O’Neill, resign having lost the support of the House after more than seven years in power.

The speaker then suspended parliament so Marape could be sworn in by Governor-General Bob Dadae. Legislators surrounded the new prime minister to congratulate him.

In a Facebook post early on Thursday, Marape pledged to make PNG “the ‘richest black Christian nation’ on Earth” and to put the “national interest ahead of personal and corporate interest”.

Marape was supported by members of O’Neill’s government but it was not immediately clear whether there would be ministerial changes. His election is likely to spell continuity in many fields, but it could bring changes to energy policy and relations with neighbouring Australia.

Political instability is not unusual in PNG poverty-stricken but resource-rich PNG but Marape’s defection from the government tapped into growing concern over governance and resource benefits not reaching the poor.

Marape and his allies have indicated that the gas agreement, which allows Total, Oil Search Ltd and ExxonMobil Corp to begin work on a $13bn plan to almost double gas exports, could be reviewed to redistribute the spoils of the contract.

“Agreements and resources laws will be relooked at as a matter of priority,” Philip Undialu, a legislator aligned with Marape, told Reuters news agency by text message. “It’s going to be a fair deal not necessarily radical,” he said.

When he resigned, Marape cited differences with O’Neill on “work and policy related matters” as well as the lack of local “participation in our gas, oil sector” and mining industry.

In reference to the April deal, Marape, who comes from energy-rich Hela province, told PNG’s National newspaper two weeks ago that “something is wrong somewhere when the government is not unlocking… resources for our people”.

“We have a government that wants to save the interests of corporate giants,” he said.

Marape has also been critical of “corrupt contracts” with Australia to settle asylum seekers on tropical island camps, including on PNG’s Manus Island, and demanded an investigation.

“Since we put our hands up to assist Australia in 2013… we sacrificed Manus’ reputation as one of the world’s safest tropical islands” he was quoted as saying in February.

Rouhani says Iran will not be ‘bullied’ into US talks