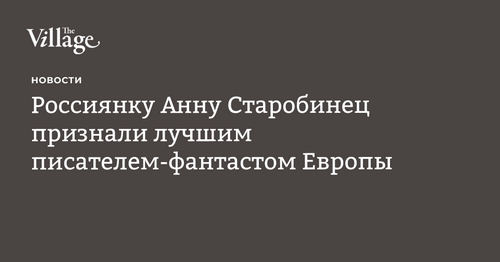 Russian writer Anna Starobinets became a laureate of the prize of the European society of science fiction in the nomination “the Best writer”.

The winners were announced in the French city of Amiens in the framework of the festival “Eurocon”. This year awards were also given to Director Luc Besson in the category “Best dramatic show” for the film “Valerian and the city of a thousand planets” and the French writer gérard Klein in the nomination “Grand-master of Europe”.

Anna Starobinets works in the genres of science fiction and Thriller, and also writes children’s books. Her works have been translated into English, French, Spanish and Italian. In 2014, the author received the prize for young writers “Azbest – the beginning of” the storybook “Ikarov iron.”

“Walking through the old Irkutsk” will talk about local poets

How broadband Internet affects the duration of sleep