A Maltese armed forces patrol boat picked up 216 migrants and refugees from two dinghies in the Mediterranean Sea and was bringing them to Malta on Saturday, a spokesman said. 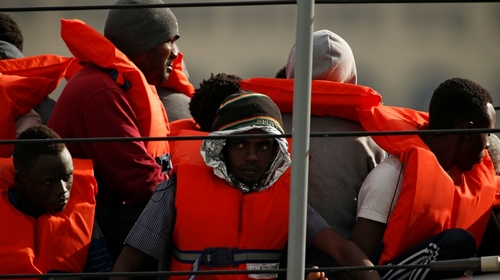 At least one pregnant woman and a number of children were believed to be among the rescued. Their nationality was not known.

A spokesman for the Maltese navy said a patrol boat had been deployed to a sinking dinghy south of Malta on Friday.

The navy said the migrants were on board two boats, and the first group was rescued after it “sent out a distress call that their boat was taking in water”.

After picking up the first group, the boat was diverted to a second dinghy “after receiving another distress call”.

The armed forces said that with good weather conditions prevailing, departures of migrants from Libya, Tunisia, and Algeria had increased in the past two days, resulting in 12 boats arriving in Sicily, Sardinia, and Lampedusa.

Meanwhile, Italian authorities said they took 54 people from Pakistan to a migrant centre after finding them onboard a sailboat off the coast of Calabria in southern Italy.

The Italian ANSA news agency says two Russian nationals onboard the US-flagged boat were arrested and accused of seeking to smuggle the migrants into Italy on Friday night. The agency says the refugees were all men.

Italy’s financial police discovered the boat and towed it to Crotone, a port town on the Ionian Sea in Calabria. Officials say the men were in decent health.

Malta, which was holding a vote for the European Union parliament on Saturday, has also appealed to the EU for help in dealing with the flow of migrants, which much larger neighbour Italy has begun to turn away.

The island of 450,000 people is a common destination for refugees and migrants trying to cross the Mediterranean from North Africa, and a hardliner stance from Italy has increased pressure on it.

More than 500 migrants have reached Malta this year, while 1,425 have made it to Italy, which has a population 130 times larger.

International Organisation for Migration figures show 24,687 migrants have reached Europe so far this year, well below the record of around one million in 2015, and also likely to fall below the 2018 figure of 144,000.

Among EU member states, Spain took in the most migrants last year, at around 65,000.

One thought on “Hundreds of migrants and refugees rescued off Malta, Italy”