Difficult to know where to start, really. So perhaps it’s worth repeating, in full, the first paragraph of an AFP report from earlier this week:

Jeremy Hunt, Britain’s new foreign secretary, has made an awkward debut in China when he sought to curry favour with his hosts by mentioning his Chinese wife, but accidentally referred to her as ‘Japanese’.”

Your first question might well be: how? Seriously, how? And the answer is, simply: Jeremy Hunt.

Becoming foreign secretary by replacing Boris Johnson – a man who thinks he is Winston Churchill but is actually Prince Philip – Hunt was supposed to make us less of a laughing stock on the world stage. He is meant to be the straight, serious man.

A poll on Tuesday by ConservativeHome revealed that just 55% of Tory party members think their party can win the next election outright or in coalition, and in a separate SkyData poll, 74% of the public think Theresa May is doing a bad job. With May’s position far from secure, Hunt is one of the favourites to replace her. (Johnson, unfathomably, still polls well as a replacement, despite the fact you could never be too sure he wouldn’t swap his Remembrance Sunday poppy for one of those clown water-squirt flowers, just for a laugh.)

But the truth is, if Hunt is the Tories’ best hope for aptitude and gravitas, they are in trouble. He has quite the history of gaffes, quirks and snafus. On Tuesday afternoon, as a social media mea culpa for wifegate, Hunt tweeted: “In Paris, choosing some flowers to bring back to Mrs H”. Might I suggest sakura, the national flower of Japan? But also, what’s with “Mrs H?” This is neither an affair during the 19th century, nor Mumsnet. 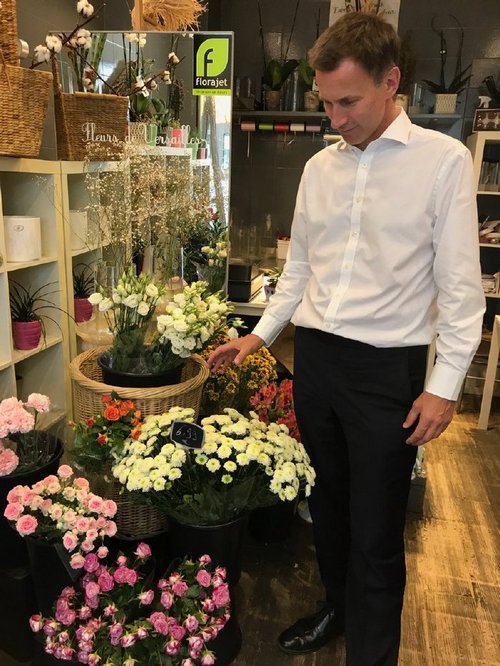 In Paris choosing some flowers to bring back to Mrs H pic.twitter.com/iGzWyj0oOA

Hunt has brought Mrs H, or Lucia Guo, as she is actually known, into the public eye once before. In fairness, that time he gets full points for getting her nationality correct, saying: “My wife is Chinese … are we going to be a country that is prepared to work hard in the way that Asian economies are prepared to work hard?” Which rather pissed off people in the UK. He didn’t piss people off quite as much as Labour’s Helen Goodman, however, whose response was: “If China is so great, why did Jeremy Hunt’s wife come to England?” That’s the thing about politics: put your foot in your mouth, and you can guarantee it won’t be too long before someone stuffs an entire leg into theirs.

Other Hunt classics include: when he accidentally pulled the emergency stop cord in a train loo; the time he posed for a photo in front of an entire whiteboard of confidential patient records, which he then tweeted; and that glorious moment when he almost decapitated a woman when ringing a bell.

He was also once: followed around a car park, in the rain, by a sousaphone player (thanks to television show, The Last Leg); followed again by a giant sousaphone player while crossing a road (The Last Leg again); presented with a giant, gold penis for being “Dick of the Year” (you spoil us, The Last Leg!); and was given an 8ft mock-up of a “statistics for dummies” book by a group of junior doctors. Oh, there’s also the time he bizarrely would only be interviewed standing up on Newsnight, which prompted presenter James O’Brien to comment afterwards, deadpan: “I should explain it was not my idea to conduct that interview both standing up: it was Mr. Hunt’s.”

There’s the time Hunt oversaw the installation of a £44,000 bathroom suite, but then, who among us has not gone a bit Versailles with the renovations? Hunt did clarify that the bathroom was a communal one. Presumably so others could help him differentiate between a flush chain and an emergency cord.

He’s a strange one, is Hunt. Apart from undermining an entire generation of NHS staff, pretty much ignoring what the Red Cross deemed a “humanitarian crisis” in our hospitals, and spending his Saturdays with a megaphone shouting: “WHY AREN’T YOU AT WORK?” into the faces of passersby – probably – he has sometimes come across as smart and, when not squirrelling out the back entrance of Richmond House to avoid protesters, pretty affable. Despite this, he’s still been followed around three times by a sousaphone player.

It’s just not really the quality one looks for in a leader, is it? At the very least you want someone who is competent and respected. You don’t want the guy who, as culture secretary, should have been seriously scrutinising the Murdochs’ takeover bid for BSkyB instead of dancing the lambada – an actual, genuine hobby of Hunt’s for which he has a specially dedicated sprung room in his home, as revealed by Michael Gove (“Dance your stubborn best!”). By all accounts, by which I mean specifically the account that Hunt’s dance teacher once gave in an interview, the foreign secretary is very good. The Times calls him the “lambada king”. He even used to attend salsa classes at Pineapple Dance Studios, which puts him in the same category as a lot of early noughties reality television stars. Unclear whether he, too, used to wear a pastel-coloured velour tracksuit.

I genuinely think it’s refreshing for politicians to have a passion, but how can one trust that Hunt has even remembered his passion correctly? He might turn around tomorrow and remember it’s actually the tango he loves. And what to do with a guy who, when the Conservatives decided to zhoosh up their Instagram page for conference, could only contribute by sitting slightly obscured behind a door with a nervous grin? Don’t worry, Kendall Jenner!

It’s true, he has staying power. He became the longest-serving health secretary – although smugly tweeting the Twainesque “reports of my death have been greatly exaggerated” after clinging to his job when people were dying in hospital corridors, did not, I would suggest, strike the right tone. He has cannily positioned himself as a unity candidate, voting for remain, but now suggesting he would vote leave in a second referendum.

But if Hunt, whose general appearance is of a vampire who’s just walked in on his own surprise birthday party, is the best the Tories have got, it just highlights the true farce that is the rest of government. Brexit means Brexit, even though nobody knows what Brexit means, and so nobody knows what means means; and the likes of Jacob Rees-Mogg seem intent on destroying all future prosperity and causing havoc in Northern Ireland. I suppose the one good thing about the prime minister, who read geography at university (be honest, you knew that even if you didn’t), is, well, she probably knows the difference between China and Japan.