Israel announced on Wednesday it had tightened restrictions on Palestinian fishing off the blockaded Gaza Strip after more balloons fitted with firebombs were floated from the enclave into its territory.

The zone it allows Gaza fishermen was reduced to a maximum of 10 nautical miles from 15, COGAT, the Israeli defence ministry unit that oversees such regulations, said.

The move came just days after Israel restored the fishing limit to the 15 nautical mile maximum after a previous cut in response to fire balloons last week. 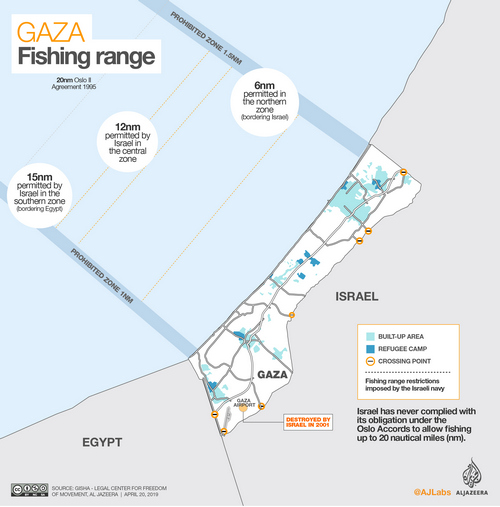 The measure was seen as a first step in implementing a fragile truce meant to avert a new conflict between Israel and Palestinian armed factions.

Under the Oslo Accords signed in 1993, Israel is obligated to permit fishing up to 20 nautical miles, but this has never been implemented.

In practice, Israel only allowed fishing up to 12 nautical miles until 2006, when the fishing zone was reduced to six and later to three.

Israel maintains a heavy naval presence, restricting any traffic in and out of the enclave as well as the distance Gaza’s fishermen can travel to fish, severely affecting the livelihoods of some 4,000 fishermen and at least 1,500 more people involved in the fishing industry.

The economy of Gaza, home to around two million Palestinians, has suffered from years of Israeli and Egyptian blockades, as well as recent foreign aid cuts and sanctions by the Palestinian Authority, a rival of Hamas that governs the occupied West Bank.