On Sunday evening, she was once again lighting candles at the Ratchaprasong intersection in Bangkok’s main shopping strip that was at the heart of the 2010 demonstrations, and only a few hundred metres from where her daughter died.

Phayaw Akhahad wears the bloody nurse’s overall her daughter, Kamonket, was wearing when she was shot by soldiers from Thailand’s Special Forces [Human Rights Watch/Al Jazeera] 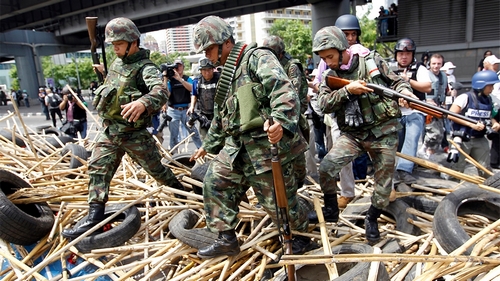 Bangkok, Thailand – For the past nine years, Phayaw Akkahad has been tirelessly seeking justice for her daughter and scores of other people killed when Thailand’s army embarked on a final push to break up anti-government protests that had brought the capital to a standstill.

“I want the truth,” she told Al Jazeera in an interview at the end of March. “Just the facts and the truth.”

Official investigations have concluded that at least 98 people were killed and 2,000 wounded as mass protests against the government of then-Prime Minister Abhisit Vejjajiva descended into violence in May 2010.

The military, backed by Abhisit’s government, had stepped up efforts to reclaim the streets after the failure of mediation with the United Front for Democracy against Dictatorship (UDD), better known as the Red Shirts, which had been protesting since March.

As the days progressed, the situation deteriorated. There was arson and looting, and a shadowy group of more violent UDD protesters known as the Black Shirts.

On the morning of May 19, Akkahad’s 25-year-old daughter, Kamonket, went into the city to buy flowers – the hospital where she had been working had run into financial difficulties so she was helping with the family’s flower stall.

But when the trained nursing assistant saw what was going on, she called her mother to let her know she wanted to stay and help the wounded.

“She was like that,” Akkahad said, recalling one of their final conversations. “She was always the person who would volunteer.”

Dressed in a sky-blue overall marked with a large red cross, Kamonket was tending to the wounded at Wat Pathumwanaram, a Buddhist temple overlooked by shopping centres crowded with designer-clothes shops where hundreds of people had sought shelter amid the violence.

Kamonket urged her mother not to worry because the temple was an agreed “safe zone” and she was a first aider.

The five bullets that were later removed from Kamonket’s body suggested she had been crouching down when she was shot. Another nurse told Human Rights Watch (HRW) that Kamonket had been attempting to resuscitate a badly-wounded man near the temple’s entrance.

“She got so many bullets,” Akkahad told Al Jazeera at the market stall where she now sells coffee and other drinks. She blames not only the military and Abhisit for what happened, but the Red Shirt leaders too.

“The people who should take responsibility have never said sorry. They should go to jail.” 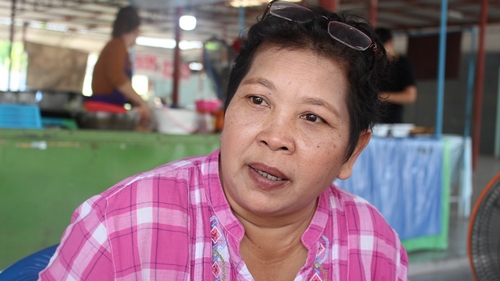 Murder charges against Abhisit, who authorised the army’s use of live bullets, and his deputy Suthep Thaugsuban were dropped in 2014. Earlier this month, a military court said it would not indict eight soldiers accused of fatally wounding the six civilians who were in the temple because there were no witnesses to the killings and no evidence.

“What is left is unaddressed grievances that after all these years are still very much visible,” said Sunai Phasuk, a researcher at HRW who monitored the 2010 protests closely. “Still very much bitter such that it can mobilise anger towards the military and towards Abhisit and Suthep. And it remains a politically-sensitive issue.”

An inquest by the Bangkok Criminal Court in 2013, which based its findings on the evidence gathered by the Department of Special Investigation at the Ministry of Justice, said the residue from the bullets found in the bodies of those killed in Wat Pathumwanaram matched those used by soldiers who fired their assault rifles from the train lines overlooking the temple. A unit of the special forces was responsible, it said.

In a statement, HRW said the decision to drop the investigation against the soldiers was the “latest insult” to the families of the victims who included not only medics such as Kamonket, but journalists and bystanders too.

Abhisit, who established a commission to look into the violence, insists he was left with no choice but to allow the use of live bullets because some of the protesters were armed.

“Do you fight people who are armed without live bullets,” he asked rhetorically in an interview with Al Jazeera. “Where does that happen? We have never had in the past armed groups infused within demonstrators and we had to somehow resolve the situation. Every action we took, we took legally. We tried our best to resolve the situation. We obviously regret the losses.”

Akkahad has little time for Abhisit’s regret. She shakes her head.

“He knew what could happen,” she said. “He could see that people might die. Why do such a thing?”

It was a relative who first told Akkahad that Kamonket was dead and frantically called her daughter’s mobile in the hope she would answer.The person who picked up the call urged her to stay calm, as he confirmed the news she dreaded to hear.

“‘Don’t tease me,’ I told him, ‘Tell me the truth’ and he said that he was,” she told Al Jazeera, tears welling in her eyes. “That it was true and that Kamonket was dead.”

But it was only later, when Akkahad was watching TV, that she was truly convinced.

“There were pictures of bodies covered by white sheets,” she said. “I saw my daughter’s feet poking out. That’s when I knew that it was true.”

The Eton and Oxford-educated Abhisit was defeated in elections in 2011, and the Red Shirt-supported government of Yingluck Shinawatra that came to power was overthrown by the military in a coup three years later.

The country itself has become increasingly authoritarian since the crackdown and now the putsch’s leader, former army chief Prayuth Chan-ocha, looks poised to become the country’s next civilian prime minister after elections in March. It was three months after Prayuth took power five years ago that the court dropped the case against Abhisit.

At Bangkok’s Ratchaprasong intersection, where Akkahad and others gather each year to remember the dead, the city authorities have installed large plant pots on the pavement. Akkahad said she had been harassed and followed as a result of her continuing fight for justice. In December last year, she was charged for contravening public assembly laws.

“I have already chosen to die or get arrested and sent to jail to get justice,” she said.

“I will keep fighting until the day I die.”

Will pressuring Sudan make a difference?