Days after announcing that she will run as a vice-presidential candidate in the upcoming election, Kirchner will stare down allegations that she headed up an illicit association that awarded 51 public works projects at inflated prices to friend and businessman, Lazaro Baez, in her home province of Santa Cruz. 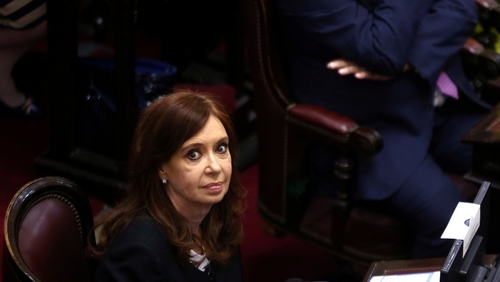 Buenos Aires – All eyes in Argentina will be on a courtroom in Buenos Aires on Tuesday, as the first corruption trial begins against former President Cristina Fernandez de Kirchner, who remains one of the most polarising figures in the country.

It is the first of 11 court cases against Kirchner, which include allegations of bribery and coverup.

In a statement released hours before the trial is expected to kick off, Kirchner called it a “new act of persecution” orchestrated by current President Mauricio Macri.

“Trials should seek the truth. But it doesn’t look like that is going to happen here,” she wrote on Twitter. “They only create a new smoke screen that aims to distract Argentines and Argentina – each time with less success – from the dramatic situation that our country and our people are living.”

The Macri government, for its part, rejected Kirchner’s characterisation of the trial. Justice Minister German Garavano told a radio station that the trial is the appropriate venue to “explain to the public why a businessman received so many public works projects worth millions”.

More than three years after her two terms came to an end, Kirchner, who currently sits as a senator, is the most talked about politician in Argentina. On the weekend, she sent a jolt through the political class by announcing a vice-presidential bid, not a presidential bid, as most had been speculating.

Her running mate will be Alberto Fernandez (no relation), who served as chief of cabinet in the government of Nestor Kirchner, Cristina Kirchner’s predecessor and late husband. Fernandez parted ways with Cristina Kirchner during her first term amid a political conflict with the country’s powerful agricultural sector.

Tuesday’s trial is expected to stretch out for more than a year, extending beyond the election campaign.

The offences are alleged to have started during Nestor Kirchner’s presidency, but Cristina Kirchner is accused of having “damaged the interests entrusted to her by violating her duty to administer and faithfully take care of the assets of the state that were under her responsibility, as the head of government and the political person responsible for the general administration of the country” between December 10, 2007 and December 9, 2015. She has denied taking any action related to the contracts, all related to road infrastructure.

Twelve other people are accused in the case, including Baez, Julio De Vido, a former minister, and Jose Lopez, a former secretary in her government.

“It’s an important trial because there are allegations of corruption that could involve her, at least as the political person responsible, regardless of if she is the intellectual author of the deeds,” said Carlos Fara, a Buenos Aires-based political strategist.

‘They steal, but they do’

Fara predicted, however, that the trial will do little to change what the electorate thinks of Kirchner.

“Cristina is not going to lose votes because of the trials. What is true is that the cases put a ceiling on her popularity, that’s without a doubt,” he said. In terms of a ballot question, Fara says Argentina’s crippled economy, which saw inflation jump by nearly 50 percent last year, has usurped any allegations of corruption levied against Kirchner.

“That’s why Macri is doing worse than she is in so far as public opinion, and Cristina, both in terms of her public image and electoral chances, is in the strongest position she’s been in since leaving the government in December 2015.”

Ana Paola Zumba, a political analyst with Argentine polling firm Gustavo Cordoba & Asociados, said that while allegations of corruption mattered at the end of Kirchner’s tenure, they “don’t have any kind of impact” on public opinion now.

“It’s not that it doesn’t matter. It’s just that Argentines have other priorities,” said Zumba. “There is an old phrase, that is overused, in Argentine politics that goes something like, ‘they steal, but they do'”.

Not only are Argentines more concerned about solving their immediate economic needs, but the credibility of key institutions like the judiciary has deteriorated so much that people either do not know what to believe, or do not think the system is capable of rendering justice, she said.

“I really don’t think [Kirchner is] worried about the trial,” added Zumba. “Of course, it’s not the photo that she wants to have, but I think her main concern was to take the offensive and dictate the political context from here [in the campaign]… She is taking the lead and forcing other actors to make decisions.”