In November 2016, no one was more surprised at Donald Trump’s victory at the polls than Trump himself. Beating Hilary Clinton, a career politician, he became the first American president with no prior public service experience. 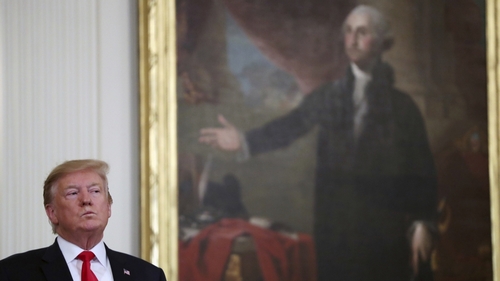 President Donald Trump stands near a portrait of George Washington in the East Room of the White House on April 18, 2019 [File: AP Photo/Andrew Harnik]

Needless to say, when he came to power, Trump did not have a comprehensive plan for the United States, much less for its role in the world. Analysts and the media struggled to figure out what exactly he would mean for US foreign policy.

The only clue they had was a dozen lamentations, which he paid to get published as a full-page ad in the New York Times in 1987, and which he repeated regularly until he won the White House.

The world had its first close encounter with Trumpism two years ago this week, when Trump embarked on his first foreign trip as president. He patronised, bullied and chastised dozens of heads of state in seven days that shook the world.

At his first stop in Riyadh, Trump praised Saudi Arabia, bashed Iran, and lectured 50 Arab and Muslim leaders on the need to combat “Islamist extremism” and “Islamist terrorism”. In return, Trump received $110bn in Saudi arms purchases and investment commitments. It was a profitable visit which not even his “Muslim ban” could overshadow.

On his second stop, the US president visited Jerusalem and Bethlehem where he praised Prime Minister Benjamin Netanyahu, berated Palestinian leader Mahmoud Abbas, and vowed to “trump” all previous deals with the “ultimate deal”, courtesy of his son-in-law, Jared Kushner. The latter, of course, is a certified radical Zionist with no foreign policy experience, who insists on ignoring all UN resolutions and scrapping all past agreements.

Trump then attended three consecutive summits with his supposed allies from NATO, the EU, and the G7. At the three gatherings, he scolded partners about defence spending, trade, refugees, and Russia, avoided making commitments to Western collective security, and even shoved a European head of state for good measure.

If there was any doubt about Trump’s style and determination to have it his way, it was put to rest that week.

Former House Speaker and presidential candidate, Newt Gingrich was among the first to try to define Trumpism. In a series of lectures and a pair of books, he paints the picture of a bold and brilliant leadership, unique in its style and superior in its goals.

If you thought Trump is simply a superficial TV addict whose longest thought comes in 128 characters, you were wrong. The man you were told is a liar, a trickster, and a bully is in fact a brilliant tactician, savvy negotiator, and quick learner, says Gingrich.

He argues that Trump is a transformative president in the league of George Washington and Abraham Lincoln. Like Washington, Trump may not be an intellectual, but he is a towering charismatic figure. And like Lincoln, he has emerged as the right leader at the right time to pull the country out of the “carnage”.

Apart from all the forced parallels, what becomes clear from Gingrich’s obsequious writings is that Trump is neither a revolutionary, nor an ideologue, but rather a populist pragmatic who applies what he learned in business, domestically and internationally.

As a CEO, he wants to see America do business with minimum regulation, obstacles or inhibitions. Trump also sees relations with other countries as a zero-sum game, where one country’s win is another’s loss.

In fact, he seems to view the world through a rather Hobbesian lens – as a place where self-interested people and power-hungry states live in perpetual chaos and conflict.

Trump’s aim is to replace the “new world order” established by George H W Bush in the aftermath of the Cold War with his “America First” order. But what does this mean exactly for the rest of the world?

As he elaborated during his inaugural speech, America has been too generous to too many states for too long, godfathering state building abroad while ignoring the decay at home. But now that Trump is in the White House, to paraphrase John F Kennedy: “ask not what America can do for you; ask what you can do for America.”

That’s why Trump is killing or renegotiating every deal, agreement, or treaty he believes is not working in US favour and is pulling the country out of any international institution that he judges does not serve US interests.

Indeed, during his two years in office, Trump withdrew from a number of US agreements on trade, nuclear proliferation, and climate change, and imposed tariffs on goods from a number of countries, including China and Germany. He also pulled the US out of two UN organisations, UNESCO and the UNHRC, and halted contributions to a third, UNRWA.

He has abandoned the 25-year-old Middle East peace process in favour of embracing Israel’s annexation of occupied territories and the buyout of the Palestinians as a pathway to peace.

CEO Trump never had more success than with Brand Trump. He put his name on towers, hotels, resorts, golf courses, luxury items, food, and even water, making a fortune out of those five letters.

President Trump wants to repeat that success in politics: He wants to renegotiate and rebrand, substance and objective be damned.

So far these efforts have brought mixed results at best. He has tried to rebrand Obama Care, but has failed. He supposedly succeeded in revamping NAFTA, but the provisions he introduced are of little long-term consequence. He says he wants to renegotiate other agreements like the Trans Pacific Partnership (TPP), the Iran nuclear deal, the Paris agreement on climate change, etc, but his success in those endeavours is doubtful.

This is because he simply has nothing new to offer and resorts to recycling old policies and slogans, starting with “Make America Great Again”, which he borrowed from Ronald Reagan.

This is particularly apparent in his foreign policy pursuits. Trump claims to be charting a new doctrine, when in fact, he is merely rebranding his predecessors’. He is following in the footsteps of Barrack Obama on substance and George W Bush on strategy.

Before Trump came to power, Obama’s agenda was putting America first in a multipolar world, ending free rides for collective security among US allies, expressing readiness to negotiate with “rogue regimes” like North Korea and Iran, and telling Middle Easterners the US can’t solve their problems for them, all while making things worse. Trump has basically tried the same thing, but in a boorish and offensive Trumpian way.

And like Bush Jr, Trump has adopted a “good vs evil” rhetoric, vastly increased military spending and made the (mis)use of US power his foreign policy tool of choice, especially in the Middle East. His aggressive posturing and warmongering, along with the humiliating demands on Iran, are more likely to lead to a showdown than a drawdown in this volatile region.

Trump has become used to having it both ways: blasting Obama and Bush as failed presidents while following in their footsteps. Yet this copy-cat strategy covered up by rebranding efforts might not turn out a success.

Today, there is little to no evidence that Trump will be able to produce better agreements than his predecessors’ with the likes of Russia, China, North Korea, or Iran, not after abandoning European and Pacific allies. You don’t start a trade war with Beijing when you need China to pressure North Korea, and you don’t throw Europe under the bus when its help is indispensable in dealing with Iran.

Indeed, Trumpism is looking increasingly like a fantasy, a Trumptasy: making big promises but yielding little or no real results.

It all reminds me of Gingrich’s claim that Trump is a man of the people – despite the gold-plated penthouse he lives in – because he eats McDonalds. His eating habits are surely keeping him in touch with blue-collar America.

Despite the absurdity of this proposition, Trump indeed succeeded in branding himself as the voice of the American working class while trotting around the country in his private Boeing 757 jet.

But in an increasingly complex multi-polar world, one defined by upheaval and increased competition for scarce resources, it is difficult to see how the US president could pull off the same trick: having his burger and eating it too.