Thousands of young protesters in Australia and New Zealand have kicked off the second wave of global school strikes demanding urgent action on climate change.

Organisers expect more than a million students to join rallies on Friday in some 120 countries demanding that politicians and business leaders move quickly to reduce greenhouse gas emissions.

The demonstrations are inspired by 16-year-old Swedish teen environmentalist Greta Thunberg, who has staged a weekly protest outside parliament in Stockholm since August 2018.

Calling for climate action under the Fridays for Future slogan, the school-strike movement has since grown exponentially, with groups around the world using social media to cluster into larger, self-organising networks.

MASSIVE! Look at all the people out in New Zealand! 1623 places, 119 countries, and counting!

Young people standing up to demand we act on the growing climate crisis.#ActOnClimate. #FridaysForFuture #ClimateStrike pic.twitter.com/zyYYQ5RhkK

“I’m worried about all the weather disasters. Every time we have huge a bushfire here another animal might go extinct,” said Nina Pasqualini, a 13-year-old at a rally in the Australian city of Melbourne, led by the group Extinction Rebellion.

“The government isn’t doing as much as it should. It’s just scary for younger generations,” she told Reuters news agency, holding up a placard seeking to stop a proposed new coal mine in Australia.

Global warming due to heat-trapping greenhouse gases from burning fossil fuels has brought more droughts and heatwaves, melting of glaciers, rising sea levels and devastating floods, according to scientists.

Last year, global carbon emissions hit a record high, despite a warning from the United Nations-backed Intergovernmental Panel on Climate Change in October that output of the gases would have to be cut over the next 12 years to stabilise the climate.

Against a backdrop of elections to the European Parliament, which began on Thursday, the Frankfurt school strikers plan to march on the headquarters of the European Central Bank (ECB) to demand that it stop financing the fossil fuel industry.

The ECB says its mandate is to control inflation and not to favour certain market sectors over others.

In a video clip on Instagram, Thunberg, who was set to take part at a rally in Stockholm, urged young Europeans to vote in the elections that run from Thursday to Sunday. 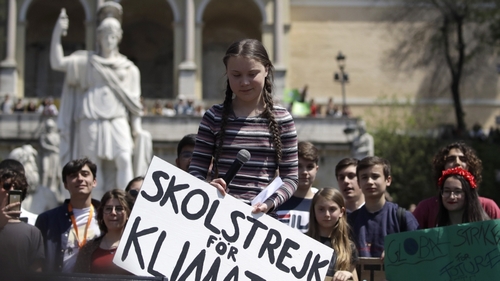 “If you, like me, are determined to bring attention to the ongoing climate and ecological crisis, and truly care about the future living conditions for all species, then going to vote is one of the most powerful things you can do,” the 16-year-old said.

In New Zealand, the first nationwide school strike for climate action on March 15 was overshadowed by the news of the attacks on two Christchurch mosques on the same day, when dozens of Muslim worshippers were massacred.

Around the world, hundreds of thousands of young activists took to the streets in more than 130 countries from Australia to Uruguay.

Sophie Hanford, a national organiser in New Zealand, and the Melbourne organisers said they anticipated a huge student-led strike in September that would include adults and workers.

“There’ll definitely be more. This is only the beginning,” Hanford said on New Zealand’s Breakfast television show.