A screaming Donald Trump sits at the wheel of a white Austin Maestro van, rusting in a woodland glade. Cliff Richard sunbathes on the van’s roof. A concerned Noel Edmonds looks on as Last of the Summer Wine’s Howard and Marina emerge furtively from the bushes. In the foreground, Kim Jong-un, David Gest and the desolate figure of actor Steve McFadden (aka EastEnders’ Phil Mitchell) re-enact the picnic from Manet’s Le Déjeuner sur l’herbe.

This is the phantasmagoric photomontage world of McFadden’s Cold War (aka Coldwar Steve), a blackly comic Twitter account where the likes of Trump, Kim, Nigel Farage, Boris Johnson are pilloried in a purgatorial Albion of abandoned caravans, flat-roof pubs and dank laybys, amid a rogues’ gallery of low-rent celebrities, serial killers, football managers, and the ever present figure of McFadden. 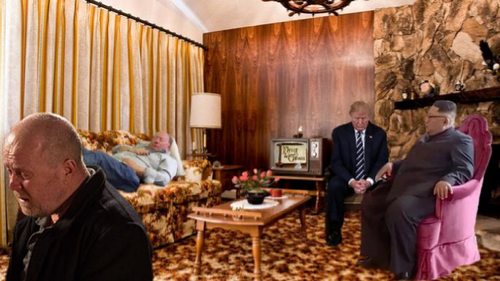 New pictures from the meeting have been released. pic.twitter.com/BlKtsajRyE

In the two grisly years since the EU referendum, McFadden’s Cold War has accumulated more than 64,000 followers, with everyone from staunch remainers to disillusioned leavers addicted to these black-hearted bulletins of comic grotesquerie from a post-Brexit futurescape.

Actor and director Kathy Burke has called @Coldwar_Steve “one of the funniest accounts on Twitter”, while comedian Al Murray says “It’s so funny you can’t really parse it. To say any more might shatter the thing I love about it.”

Yet, at a time when Armando Iannucci and Malcolm Gladwell are questioning satire’s power in the age of Trump, McFadden’s Cold War’s monstrous gallimaufries possess a unique lacerating force, encapsulating our plight with a ghoulish intensity.

The constant presence of Phil Mitchell sums it up: the average man in a state of existential crisis. It’s ​poetry

“They sum up Brexit Britain better than anything,” says TV and radio presenter Jamie East. “His montages are harsh and cheap, but also strike a chord of pathos. The constant presence of Steve McFadden sums it up; the average man, constantly in a state of existential crisis. It’s poetry.”

If McFadden’s Cold War has become online therapy for those beaten down by political despair, it’s significant that it began as something similar for its creator, Christopher Spencer, a 43-year-old public-sector worker from Birmingham.

“I was going through a difficult time with my mental health,” explains Spencer. “I needed a coping mechanism. I’d played with montages on Twitter already, different celebrities with Noel Edmonds’ hair … I knocked up some pictures – Brezhnev, lying in state, Brezhnev atop the Lenin Mausoleum – added Steve McFadden. They looked great. The more incongruous they were, the funnier.”

“He’s like a modern Hogarth or Gillray,” agrees author Jon Savage. “He’s newsy and angry. It’s what Brits do best. Don’t engage with these people’s arguments because they don’t have any. Just flay them alive with humour, sarcasm and art.”

Fit for a royal … the buffet table Photograph: @Coldwar_Steve

Spencer has received criticism for positioning figures such as Harold Shipman and Fred West alongside Trump, Farage, Gove and Kim, something Savage dismisses: “Many leading Brexiteers want to overturn democracy. There is nothing worse. It needs to be brutal.”

This brutality is underlined by the montages’ intentional roughness, designed by Spencer on the bus into work with a £3 phone app.

“I know they don’t look brilliant, I don’t want them to,” he says. “People say, ‘Oh, you haven’t got the shadows right.’ That’s not what I’m doing. The comments I love are people saying, ‘I nearly left Twitter because it’s vile. I carry on because of Coldwar Steve.’” 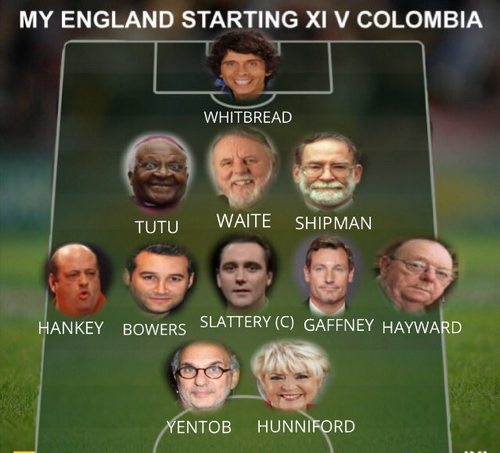 “My followers pitched in,” says Spencer. “Even the real Tony Slattery! Without sounding crass, the Virgin thing hurt because, yes, I’d like to see some fruits from this. I’m a low-paid public-sector worker with three kids and a wife annoyed at me always being on Twitter. But my followers get it. We are all in this club, laughing at these absurd idiots in power.”

“That was incredible,” says Spencer, “but he’s right. Kim Kardashian talking prison reform with Trump? Danny Dyer calling Cameron a “twat” in front of Corbyn and Pamela Anderson? The worlds are blurring.”

With that in mind, I ask Spencer if McFadden knows of the account. “Maybe,” he replies. “A few EastEnders actors follow me. They must have shown him. But from the start it’s always been a celebration. In all honesty, Coldwar Steve’s creation followed a suicide attempt. I’ve always used him with a certain reverence. Along with my wife, Coldwar Steve saved my life. The world might not be in a better place, but I am.”

Manqu or Torum: Who are you in the Ural mythology