Mindanao, Philippines – A radio host from the southern Philippine island of Mindanao was shot dead late on Wednesday, according to an organisation of journalists, becoming the latest victim in a wave of killings in the country. 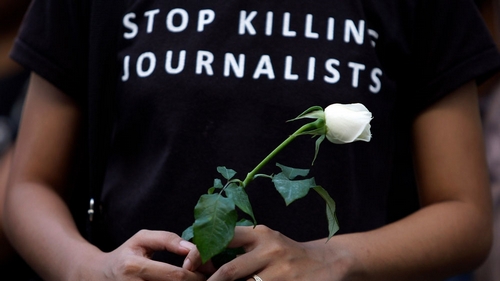 Dizon is the 13th journalist to be killed since President Duterte came to power in June 2016 FileL:/Aaron Favila/AP Photo

The National Union of Journalists of the Philippines (NUJP) said on Thursday that if Eduardo Dizon’s murder is determined to be tied to his work at an FM radio station in the city of Kidapawan, he would be the 13th journalist killed since President Rodrigo Duterte came to power in June 2016.

A police report obtained by Al Jazeera stated that Dizon was driving home, after hosting an evening news programme, when two gunmen riding a motorcycle carried out the attack.

The report said Dizon managed to steer his car to the side of the road as he tried to evade the attackers, but he was hit five times resulting in his “instantaneous death”.

The police report said that the gunmen fled towards the direction of Davao City, as authorities conducted an operation to arrest the suspects.

According to a local news report, Dizon told police that he had been receiving death threats days before he was killed.

The victim was the former manager of the same radio station, before he made an unsuccessful run for a local legislative position during the election in May.

Brigada Group, the company that owns the radio station condemned the murder.

The killing is “an attempt to silence Brigada media and its news personalities from their exposes and position on prevailing issues”, it said in a statement.

On Sunday, the NUJP reported that its organisation was harassed by unidentified persons, and accused of having links to the communists. Locally, it is being referred to as “red-tagging”.

On July 3, gunmen also fired at another local station in General Santos, another city in Mindanao.

Last June, a publisher of a local weekly publication was killed in Davao del Norte, also in Mindanao, which has been under martial law since May 2017.

The Philippines is one of the most dangerous countries to work as a journalist, with 186 media workers killed since 1986.

President Duterte, himself, has been known to denounce journalists for their coverage of his deadly drug war that has been dubbed as “murderous war on drugs” by the Amnesty International.

He has previously cursed foreign journalists for their reporting, and has said that corrupt journalists are legitimate targets of assassination.

In 2016, a self-confessed hitman from Davao, the hometown of Duterte, recently told a Senate committee hearing that the then-mayor had ordered the killing of a radio commentator who was critical of him.

Before taking office, Duterte was also quoted as saying that the slain commentator, Jun Pala, was “a rotten son of a whore”, who “deserved” to be killed.

But Duterte also previously said that he welcomed questions from the media. “I have nothing against you. I am not at liberty to be angry at anybody,” he said.