Bellavista, Colombia – The small white coffin could be held with two hands. Sitting atop a long, wooden canoe, the box floated down the murky waters of the Atrato river surrounded by dozens of other coffins – white for children, brown for adults.

Elaine Perea Chala was fixated on one. She first wailed, then held her clenched fist against her mouth in an attempt to control her emotions.

“We’re bringing back our dead,” women, dressed in white in a nearby canoe, sang in a piercing Afro-Colombian chant. Umbrellas peppered the air, shielding those present from the harsh midday sun.

It has been 17 years since Chala last saw her son, Wilmer, who was four years old at the time. She does not even have a picture of him. 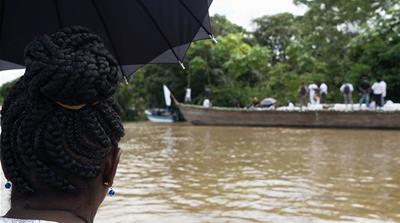 His remains, rested in the white coffin, were finally coming home for a proper burial.

On May 2, 2002, confrontations between the Revolutionary Armed Forces of Colombia (FARC) rebel group and the United Self-Defence Forces (AUC) paramilitaries erupted in Colombia’s western province of Choco. The fighting killed dozens, mostly women and children.

A cylinder bomb fell on the church where civilians took refuge amid the fighting. The official death toll stands at 74, but some estimate as many as 119 were killed in what has become known as the Bojaya massacre. Hundreds more were injured in the days of fighting leading up to the massacre. 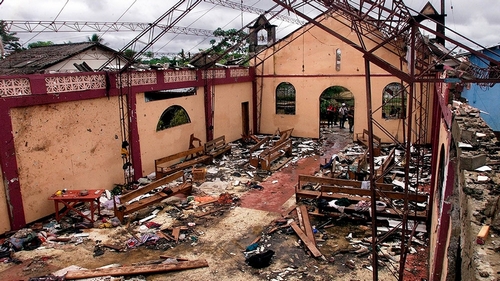 The destroyed church in Bojaya, in the northwestern state of Choco File: Ricardo Mazalan/AP Photo Daylife

Next to Chala stood her mother, Cruz Elena Chala Perea, holding an orange cloth to her mouth as the coffins drifted past. She was badly injured during the attack on the church. The remains of not just her grandson, but also her son – Chala’s younger brother – who was 11 when he died in the massacre, were being returned.

Others were there for their wives, husbands, sons, daughters, aunts, uncles, grandmothers, grandfathers, neighbours. Nearly everyone in the small riverside town was affected by the massacre in some way.

“This year he would be 21 years old,” said Chala, agony stitched in the wrinkles of her otherwise youthful face as she sat in her humble home before receiving Wilmer’s remains.

“I feel happy because we are going to be able to have a wake and give him a good burial,” Chala, whose two other sons narrowly survived the bombing, nervously told Al Jazeera just hours before the remains were due to arrive by helicopter. 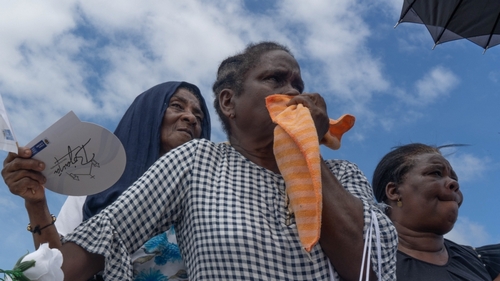 Elaine’s mother, Cruz Elena, crying upon seeing for the first time the boat carrying the small coffins with her son and grandson’s remains Cady Vogue/Al Jazeera

Following the massacre, the badly-burned bodies were left in a mass grave, making it difficult to identify the deteriorated corpses when they were exhumed in 2017. After a two-year process using new forensic technology, the remains of 72 victims were identified, and on Monday, handed over to their families.

Ninety-nine coffins were flown in from Medellin, some containing bodies, others empty to represent those never found or still unidentified and some to represent the unborn babies whose pregnant mothers were killed in the blast.

‘The wounds have remained open’

Bellavista, a small, predominantly Afro-Colombian town perched on the dense jungle banks of the Atrato River, sits a three-hour boat ride from Quibdo, the nearest large city. There, mourners held week-long traditional ceremonies for the dead. On Monday, they will finally be laid to rest.

The massacre displaced an estimated 6,000 people from Bojaya, where Bellavista is located. Some neighbourhoods in Quibdo are now entirely made up of displaced people from the province.

“What needs to be understood is that within our ethnic culture, we have a different way of saying goodbye to our dead,” said 34-year-old Herling Perea, a Bojaya massacre survivor who serves on the committee fighting for the victims’ rights. He collected the remains of his brother, niece, aunt and cousin. 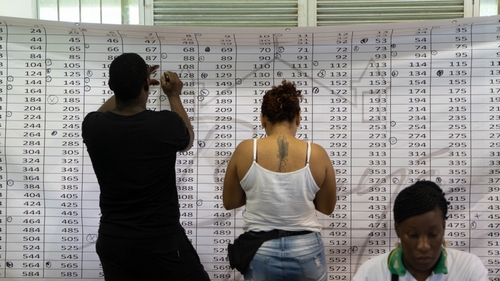 “At the time of our families deaths, it wasn’t possible for us to sing and pray for them in our way,” Perea told Al Jazeera. “So that has resulted in the revictimisation of the victim’s families, because until now, the wounds have remained open.”

He added that the coming days will be “extremely important” for the whole community as “we’ll be able to give them a dignified burial … and that’s what they deserve.”

‘We still live in anxiety’

Meanwhile, however, several factors that led to the 2002 massacre still persist. Many Bellavista residents say the 2016 peace deal between the FARC and Colombian government never arrived.

A remaining rebel group, the National Liberation Army (ELN) and paramilitary groups like Glan de Golfo, vie for control on the Atrato river, where illegal mining and cocaine trafficking are rife. Residents in nearby towns live in fear of renewed violence.

“We still live in anxiety, because they’re armed groups still alive, they’re still committing crimes and you don’t know what will happen to you… when you go to sleep at night, you don’t know what’s awaiting you the next day,” Chala said. “I thank God they’re not here yet… but you never know.” 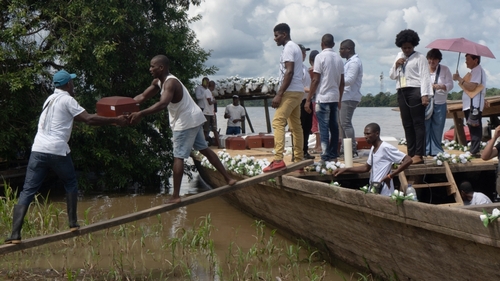 Following the massacre, the government helped build Bellavista Nueva, a new town not far from where the killings took place. In 2015, high-ranking members of the FARC travelled to the community to apologise. The government has also announced it will pay the families of the victims reparations, but some residents Al Jazeera spoke to had yet to receive any money.

Alongside the United Nations, the government’s victim unit helped organise the process of identifying and returning the victims’ remains.

The forensic process was extremely complex, according to Claudia Garcia, director of the National Institute of Legal Medicine and Forensic Sciences, who began work on the Bojaya case in May 2017, thanks to new genetic technology.

Garcia said that due to the serious damage caused to the bodies by the bomb, their original burial conditions, the very rainy nature of the Choco region, and the fact that body parts of various victims became intermingled in the mass grave, all made the DNA matching process very challenging.

I’m illiterate, but I learned a lot from my mother – and have lots of good things in my head because of her. I’m going to receive that beautiful mother of mine, but with much weakness.

Forensic teams will explain the technicalities of the process to family members over the next week, but for now, the survivors are focused on saying goodbye.

“It’s a really hard day for me. It’s painful in my home because we lost my mother, the head of the house,” said 58-year-old Maria Aurelia Moreno Mena before breaking down into tears. She also lost her son.

“I’m illiterate, but I learned a lot from my mother – and have lots of good things in my head because of her,” Moreno said before the ceremony began. “I’m going to receive that beautiful mother of mine, but with much weakness.”

Later, after the names of the victims were called out, and their remains returned, Moreno clutched a white coffin to her chest. 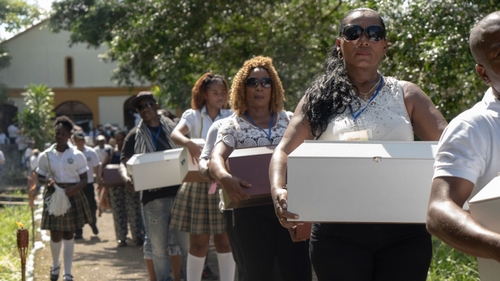