Yukiya Amano, the Japanese diplomat who led the International Atomic Energy Agency (IAEA) for a decade and was extensively involved in negotiations over Iran’s nuclear programme, has died at 72. 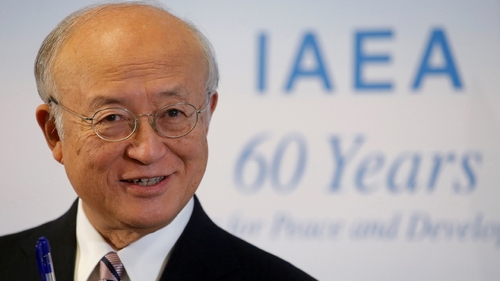 Amano, who had wide experience in disarmament, non-proliferation diplomacy and nuclear energy, had been chief of the key United Nations agency that regulates nuclear issues worldwide since 2009.

“The secretariat of the International Atomic Energy Agency regrets to inform with deepest sadness of the passing away of Director General Yukiya Amano,” the IAEA said in a statement on Monday.

It said that Amano died on July 18. But his family had only informed the IAEA late on Sunday, “with the specific request not to disclose it until the family funeral had taken place on 22 July in a quiet atmosphere”.

No details were given on the cause of death.

The announcement was made on the day Amano was expected to announce his decision to step down due to an illness that had visibly weakened him over the past year.

His third term had originally been due to expire in November 2021.

The IAEA said its flag over its headquarters in Vienna had been lowered to half-mast.

So saddened by the loss of @iaeaorg DG #Amano A man of extraordinary dedication & professionalism, always at the service of the global community in the most impartial way. I’ll never forget the work done together. It has been for me a great pleasure & privilege working with him

During his tenure, Amano oversaw the signing of a landmark deal in 2015 between Iran and six major powers – the United Kingdom, China, France, Germany, Russia and the United States – under which Tehran agreed to curb its nuclear programme in exchange for the lifting of sanctions.

“My deep condolences… We worked very closely,” tweeted Araghchi, who took part in the negotiations for the hard-won nuclear deal.

“I commend his skillful and professional performance… that resulted in complete closure” of the nuclear accord.

“May the Almighty bless his soul,” he wrote in English.

The US ambassador to the international organisations in Vienna, Jackie Wolcott, said his country “and all nuclear non-proliferation advocates have lost a great friend, and the United Nations family has lost an exceptional public servant”.

In Moscow, Russian President Vladimir Putin said he “always admired his wisdom and foresight – his ability to make informed decisions in the most difficult circumstances”.

According to the agency’s biography, Amano was Japan’s representative to the agency from 2005 until his election as director general in July 2009.

A graduate of the Tokyo University Faculty of Law, Amano joined the Japanese Foreign Ministry in 1972 and was posted to jobs in Belgium, France, Laos, Switzerland, and the US.

In a statement on Monday, Japan’s Foreign Ministry also praised Amano, saying he not only tackled international non-proliferation issues but also contributed to development with “atoms for peace and development” as a goal.

Following the Fukushima Daiichi nuclear power plant accident in 2011, Amano led “international efforts to improve nuclear safety based on the lessons learned from the accident while providing support for Japan”, it said.

The Tokyo Electric Power Co, which ran the nuclear plant in Fukushima in northeastern Japan, where three reactors sank into meltdowns after a tsunami in 2011, also praised the diplomat, saying it “received so much support and guidance on the decommissioning efforts” at the power plant from him.

The IAEA’s statement on Monday did not lay out a timeframe for naming a successor, though the race to succeed him had been taking shape since last week when it became clear he would step down early.

Argentina’s ambassador to the IAEA, Rafael Grossi, is running to succeed Amano, and diplomats say the agency’s chief coordinator Cornel Feruta of Romania, effectively Amano’s chief of staff, is also likely to run. Others could also enter the fray.

Who is Trump lawyer Rudy Giuliani?