Santiago, Chile – For 28-year-old Cristina Paillal and many others from her generation in Chile, protesting has almost become the norm.

All Chileans under 30 years of age, including the vast majority of students, were born after the 17-year dictatorship of Augusto Pinochet ended in 1990.

During Pinochet’s rule, state forces killed or forcibly disappeared thousands of Chileans and tens of thousands were tortured or imprisoned for political reasons. Students and youth dissidents were among the victims.

“The dictatorship lasted a long time. Talking about politics could get you killed. Our parents’ and grandparents’ generations lived with that fear,” Paillal, a Mapuche engineering student, said at a protest in Santiago, where tear gas lingered in the air.

“We are the new generation,” she said.

Paillal continues to be involved in student and indigenous movements. But she said because secondary students represent all social classes and are usually not yet affiliated with any political party, they tend to be at the forefront.

“The secondary student movement is fundamental,” she said. 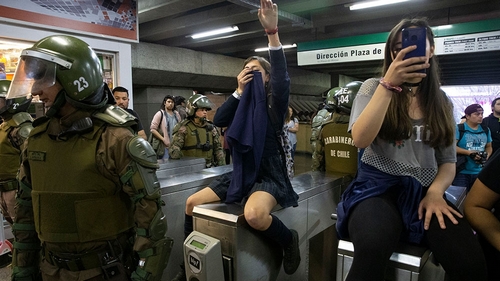 Chilean Police stand next to students blocking the turnstile to the subway protesting against the rising cost of subway and bus fare File: Esteban Felix/AP Photo

Secondary students kicked off more than a month of non-stop nationwide demonstrations when they organised mass fare evasion protests in Santiago against a now-lifted subway fare rise. Protests almost immediately broadened into demonstrations over long-simmering grievances, including growing inequality and the dictatorship-era constitution.

“It is not the subway. It is everything,” Joaquin*, a 16-year-old student, told Al Jazeera as he made his way from one protest to another.

Students have been at the heart of mass protests movements that have taken place since the end of the Pinochet dictatorship.

Secondary students were the protagonists of the 2006 “Penguin Revolution” movement for education reform, named after the appearance of school uniforms. A new education law was passed in 2009, but it did not fundamentally resolve demands for state control and funding of public education. Mass protests by secondary and university students broke out again in 2011, and have occurred sporadically since. 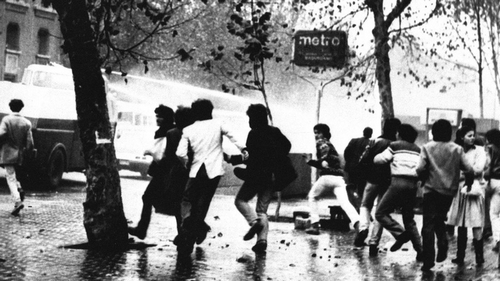 Along with protests last month, there were spates of arson and looting, with significant damage to many metro stations and supermarkets. President Sebastian Pinera decreed a state of emergency and sent the military into the streets. The measures were lifted after nine days, but police crackdowns continue.

Prosecutors are investigating 26 people killed amid the turmoil, including four young men in their 20s killed by military forces. Thousands have been wounded and arrested. Of the 7,259 detainees visited in custody by the National Human Rights Institute, 867 have been minors.

In spite of the clampdown, daily marches, rallies, occupations, street barricades, citizen assemblies and other actions continue. Police often crack down with tear gas and force regardless of whether people are in joyous mass rallies, small groups fighting back with rocks, or simply bystanders in the area. 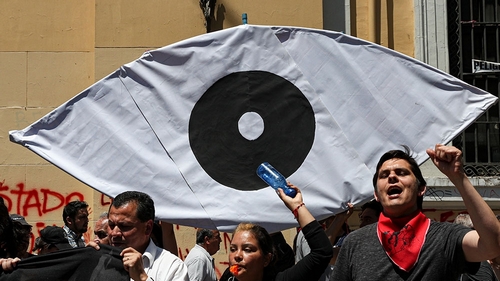 Anti-government demonstrators shout slogans against Chilean police, with a banner representing an eye, in reference of the more than 200 people who have been shot in the eyes Esteban Felix/AP Photo

Carla*, a 20-year-old psychology student, told Al Jazeera that everything began with the secondary students but now even universities without a history of social struggle have joined the protest movement.

“This is just the beginning,” she said, as thousands of people gathered at a roundabout in central Santiago that has been an epicentre for protests in recent weeks.

‘We opened our eyes because of the students’

One of the many unifying demands at protests has been a new constitution written by citizens, and after nearly a month, the government reversed its position on the matter. An April 2020 plebiscite will ask citizens whether they want a new constitution and, if so, whether they want a mixed legislator-citizen or all-citizen convention to write the document, ruling and opposition politicians said in a joint announcement in mid-November.

Citizen elections would take place in October 2020. The convention would have at least nine months to write the constitution and pass it with a two-thirds majority. It would require ratification by citizens in a nationwide referendum.

But many gaps remain concerning key procedural details, including issues of gender parity and indigenous representation. The youth who sparked the movement would also be excluded due to age restrictions from voting in the plebiscite and participating in the convention.

Yet, protesters say the students are the ones who have brought thousands of others to the streets.

“We opened our eyes because of the students,” said Mario Hernandez, an unemployed nurse technician. “They woke us up. Then, we all woke up.” 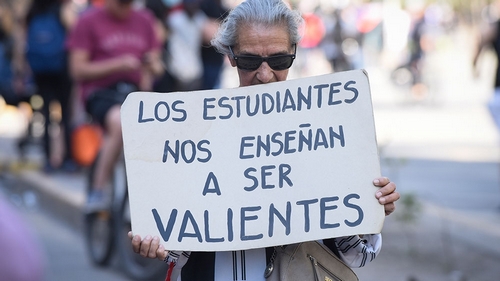 Claudio Inostroza continued to joke with Hernandez and other friends but winced slightly as a medical student washed the blood off his calf. He was just relieved police had shot him in the leg, not the eye, with a rubber-metal projectile.

“It bounced off me. I was lucky,” he told Al Jazeera as police continued to tear gas protesters along a nearby boulevard and adjacent park in the Chilean capital.

Inostroza supports protesters’ collective demands for a new constitution, higher wages, and the right to health. But he said, above all, he is in the streets for his children: a son in primary school and a daughter with more than $50,000 of student debt just halfway through her university degree in nursing.

“I want my children to have free and quality education,” he said. “I am protesting for their future.”

*Names have been changed to protect the individuals’ identities.

The biggest threats to our oceans

Planned Parenthood president forced out after only eight months