Several people died in a fire at an animation studio in the Japanese city of Kyoto on Thursday and authorities are investigating a possible arson attack, public broadcaster NHK reported, citing the police.

The police did not say how many had died, NHK said.

The broadcaster reported earlier that the fire at the Kyoto Animation studio broke out around 10:30am (01:35GMT), injuring more than 30 people, of which 10 had been unconscious.

He said the fire department had dispatched 35 fire engines and other fire-fighting vehicles to the site. 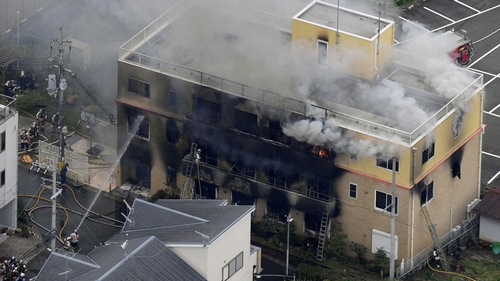 Police said they were treating the fire as a suspected arson. “A man threw a liquid and set fire to it,” a Kyoto prefectural police spokesman told AFP.

Local media said a man had been detained in connection with the blaze, but there were no immediate details on the suspect.

Public broadcaster NHK said the suspect had been taken to hospital after suffering injuries in the fire.

There was no immediate statement from the company, which produced several well-known television anime series, including “The Melancholy of Haruhi Suzumiya” and “K-ON!”

“We are in the process of learning what happened,” said a woman who answered the phone at the firm’s headquarters in Uji City in the Kyoto region.

“We cannot tell you anything more,” she added.

Charges dropped against pregnant US woman shot in stomach