This year will be different, however, as US President Donald Trump hosts what he is calling “Salute to America”, complete with a military parade in Washington, DC, and national speech.

Washington, DC – Many Americans celebrate United States Independence Day with public fireworks, neighbourhood barbecues and local parades. Politics are usually set aside. Traditionally, US presidents don’t seek much public attention, and generally, they are seen but not heard.

With Paris’s Bastille Day parade as a model, Trump has called in US Army tanks for display and ordered an elaborate fly-over of military aircraft on Thursday. Trump will also give a speech from the steps of the Lincoln Memorial.

Critics view the event, months in planning, as an inappropriate attempt by Trump, whose presidency has been highly divisive, to claim the national spotlight at a time when unity should the theme.

“This is another effort at what separates him from every other president we’ve ever had, no matter how good or bad they were,” said Aaron David Miller, an analyst at the Wilson Center in Washington, DC. 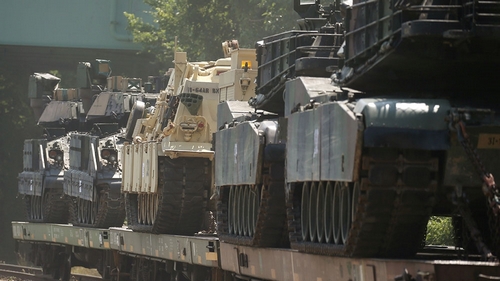 “There is no collective, national import to his actions,” Miller told Al Jazeera. “It is what moves him in the moment. It’s his own personal narcissism and sensibility without any regard for the institutions, the values and norms that have sustained the republic for a long time.”

Trump’s “Salute to America” comes as the campaign for the 2020 presidential election moves into its next phase. A group of 20 Democrats held their first national debate last week, and Trump formally kicked off his reelection bid with a rally in Florida last month.

Democrats in Congress said Trump’s planned display of tanks smacks of authoritarianism, and the use of a publicly funded event for a partisan speech violates federal rules that prevent public resources from paying for political events.

“President Trump’s attempts to make the annual Independence Day celebration … about himself are appalling,” Democrat Don Beyer said in a statement on Wednesday. “Even worse, the authoritarian-style trappings he demands, including tanks, will come at great cost to taxpayers.”

The National Park Service has been ordered to redirect $2.5m in funds for park maintenance and upkeep to help pay for Trump’s July 4 event, according to the The Washington Post. The actual cost of transporting the tanks and flying the planes will be much higher.

Trump tweeted on Wednesday that “the cost of our great salute to America tomorrow will be little compared to what it is worth”. 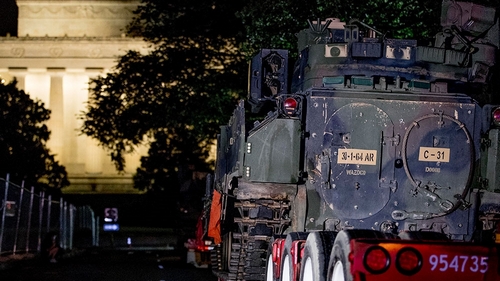 One of two Bradley Fighting Vehicles is parked next to the Lincoln Memorial before President Donald Trump’s ‘Salute to America’, event Andrew Harnik/AP Photo

Trump choosing the Lincoln Memorial for his July 4 speech has also drawn criticism.

Abraham Lincoln, the 16th US president, led the nation through the US Civil War. Lincoln’s words at Gettysburg – “that government of the people, by the people, for the people shall not perish from this earth” – are engraved on the memorial’s walls.

The memorial’s steps was also the spot where that civil rights leader Martin Luther King Jr gave his “I Have a Dream Speech” in 1963 calling for racial justice and equity.

The Republican National Committee (RNC), the presidential campaign arm of the Republican Party, has arranged special seating at Trump’s speech for top donors and political appointees. Asked why the RNC was giving away tickets to a national event, Trump adviser Kellyanne Conway rejected the notion that Trump was politicising the holiday.

“Do you know the Fourth of July is a celebration of this country’s independence? Are you even aware of that? Do you know what happened in 1776? Because it doesn’t sound like you are even talking about the patriotism that undergirds it,” Conway said in a testy exchange with reporters at the White House on Tuesday.

Six of the Democrats seeking their party’s nomination to face Trump in 2020 will be campaigning in Iowa, a heartland state, on Thursday by attending parades and barbecues, which are traditional venues for politicians on this day.

Iowa will hold the first vote in February 2020 for who should be the Democratic nominee.

“The Fourth of July is a celebration of what America represents, not an occasion for political masquerading, wrapped in red, white and blue,” Shibley Telhami, a professor of public policy at the University of Maryland, told Al Jazeera.

“It is painful to watch the president pretend to defend saluting the flag while trampling on the values it represents and the constitution intended to safeguard these values; to showcase the impressive hardware we own, instead of defending the principles that this hardware is built to protect,” Telhami said.

US presidents are often presented with choices how best to celebrate the day. In recent years, former Presidents George W Bush and Barack Obama attended naturalisation ceremonies to induct immigrants as new US citizens, a sharp contrast from Trump who has pushed anti-immigrant policies.

The last time a US president gave a speech in Washington, DC, on July 4th was in 1951 when Harry Truman spoke on “progress” in the Korean War during a commemoration of the 175th anniversary of the Declaration of Independence.

Thousands of Malians demonstrate to demand end to massacres