A prominent Iranian political figure has grabbed the headlines over shocking reports of him murdering his wife. 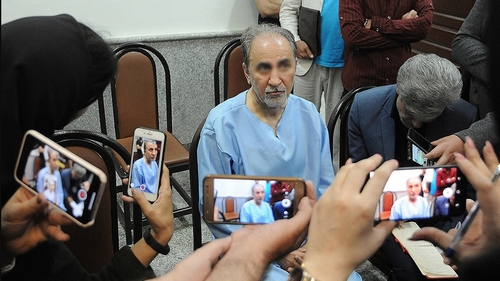 Najafi, 67, was arrested on Tuesday while walking to the Tehran Police Department, where he admitted killing Mitra Ostad over what the police referred to as “domestic issues”.

This came a few hours after news agencies reported Ostad’s body was found in the bathroom of her apartment in a high-rise apartment in northern Tehran.

One bullet reportedly pierced through her chest, while another hit her arm, out of five gunshots fired.

Ostad, 35, was one of Najafi’s two wives. Photos of his second marriage were leaked last year after he stepped down as Tehran’s mayor. It stirred criticism, even though polygamy is permitted by Iranian law.

Najafi is known as a competent reformist technocrat who led the ministries of science and education among other top posts for many years in several administrations.

But hardliners had him in the crosshairs ever since he became Tehran’s mayor in August 2017.

In the Wednesday hearing Najafi gave a more detailed account of what happened. He said had demanded for a divorce multiple times, but that met with Ostad’s refusal.

“My second wife frequently threatened me to initially destroy the lives of my first wife and my daughter, and then ruin mine by cheating on me,” Najafi was quoted as saying.

The multifaceted case of gun violence and politics has appalled many Iranians, not only for a bloody crime involving a public political figure close to the camp of President Hassan Rouhani, but through its strange coverage by national television.

The conservative Islamic Republic of Iran Broadcasting was granted access to the police station where Najafi was held. Many saw the access as strange considering the case was still in the interrogation stage.

Najafi said in an interview he intended to use the pistol only to “scare” his wife and end days of “argument”.

He said he followed Ostad to the toilet with the handgun and fired gunshots after she panicked and “scuffled” with him.

Videos made the rounds on social media where many Iranians expressed anger.

“It’s not believable at all! Since when, and based on what law, before a court is held and the investigation of the case [is complete], they interview the defendant and publicize his confessions in the media?” Journalist Moein Khazaeli asked in a tweet.

Mehdi, a 37-year-old graduate of philosophy of science, said he found it hard to believe someone he thought of as a calm, decent politician committed such a crime. But he denounced the apparent preferential treatment.

“I understand that he is an old, famous official in the Islamic Republic, and they need to maintain some sort of caution for his political position … But he is a murderer after all,” he told Al Jazeera.

Hassan Assadi Zeydabadi, a political activist and analyst close to the reformist camp, told Al Jazeera Najafi’s case will likely stir public opinion for a while.

“But it will not have meaningful influence on political dynamics in Iran,” he said.

Moscow developers will once again participate in “Black Friday”